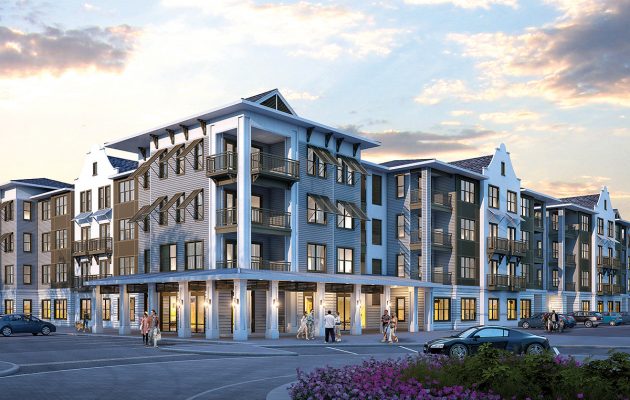 JACKSONVILLE, FL - EJF Capital and Chance Partners announced that they will develop Eastborough, a two building, 226-unit multifamily community in the San Marco neighborhood in Jacksonville, FL. The Project is in an area certified as an “Opportunity Zone” under the Tax Cuts and Jobs Act of 2017 (“TCJA”). The TCJA offers investors attractive tax benefits to invest into Opportunity Zones to create economic growth in lower income areas.

The Project is situated on a 6.62-acre parcel and will be developed with two multifamily buildings each with four stories surrounded by a surface parking lot. Synovus Bank provided $25.29 million of construction financing to the transaction.

“We have put together a winning team with EJF and Chance and we are seeing great momentum in Jacksonville,” said EJF Co-Founder and Co-Chief Executive Officer, Neal Wilson. “We believe the growth trajectory of Jacksonville remains strong and its prospects are excellent. The Project will benefit the San Marco neighborhood by continuing to add much needed workforce housing for hundreds of new residents. Coupled with The Exchange and Barlow, these projects will support a robust economic foundation for a growing community.”

Unlike other suburban multifamily submarkets of Jacksonville, which lack walkability, San Marco is a historic, leafy neighborhood, dominated by low-density commercial development, single-family homes, and community parks and squares.

“San Marco is not your typical Jacksonville neighborhood,” said Jeff Rosen, Principal with Chance Partners. “It is a community that is walkable, comfortable, promotes neighborhood interaction and offers a central location. It is designed to focus on the whole person and quality of life.”

Rosen added, “Given its proximity to the Southbank healthcare complex, downtown Jacksonville, I-95 accessibility, and the dining and social scene in San Marco, we believe the Project is perfect for young professionals.”

San Marco is proximate to Southbank and its healthcare complexes, anchored by Baptist Medical Center, one of six MD Andersen Cancer Centers, and Wolfson Children’s Hospital.

In contrast to other markets that are dominated by retail chains, San Marco offers eclectic and diverse retail tenants. It has also recently attracted major corporations that have been drawn by the market dynamics. Regency Centers broke ground on a Publix-anchored retail center this year located in the heart of San Marco. It is expected to open in late 2022.

“Eastborough is well-located to attract renters who previously did not have new, Class A rental options in San Marco,” said Asheel Shah, EJF’s Senior Managing Director and Head of Real Estate Development. “It is also attractive to employees who desire to cut their commute by living closer to their place of work, and satisfies the national trend toward living in urban, mixed-use communities.”

The Project also benefits from the rapidly growing Jacksonville MSA, which is the fourth largest in Florida by population, with nearly 1.56 million residents. The Jacksonville region has added nearly 211,000 persons since 2010, up roughly 15.6 percent, which is more than double the national growth rate. Healthcare is projected to be one of the fastest growing sectors in the region through 2028, adding more than 15,600 jobs, according to state employment projections.