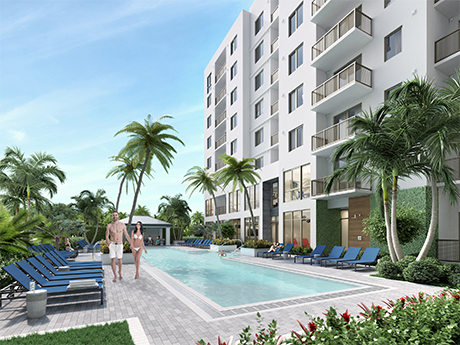 HIALEAH, FL - Walker & Dunlop, Inc. announced that it structured $67,211,400 in financing for the construction of Shoma Village Apartments, a Class A mixed-use property with 304 apartment units and 11,625 square feet of retail. Located in Hialeah, Florida, just 15 miles northwest of Miami, the local area is experiencing a significant uptick in real estate investment. Previously known as an industrial hub, the city has attracted interest from multifamily developers and investors thanks to the relatively low cost of land and excellent access to nearby employment centers.

Led by Keith Melton, David Strange, Livingston Hessam, and Jeremy Pino, Walker & Dunlop arranged the loan through the United States Department of Housing and Urban Development's (HUD) 221(d)(4) new construction program, which includes both construction and permanent financing in a single loan. The team secured a two-year construction term followed by a 40-year, fully amortizing, fixed-rate loan. The financing also features a declining prepayment schedule for the initial ten years post-construction and is open to prepayment at par for the remaining 30 years.

Mr. Pino commented, "The residential urbanization in cities like Hialeah is something we are seeing throughout Florida, and is very similar to two HUD 221(d)(4) loans we recently provided: the Highline Apartments in Downtown Melbourne, and Mirrorton Apartments in Downtown Lakeland. These infill projects provide the communities Class A Apartments next to walkable restaurants, shopping, and other amenities that are vital for these cities to thrive."

"Shoma Village was approved by HUD just before the economic standstill caused by COVID-19," stated Mr. Melton. "Despite limited access to the local municipalities, remote working, and the general uncertainty caused by the pandemic, we were pleased to have closed this transaction despite several unanticipated disruptions. It is a credit to the strength of the project, along with the confidence developers have with the HUD construction program that we were able to get this deal done."

Massoud Shojaee, President and Chairman of the real estate developer, Shoma Group, commented, "The partnership with Walker & Dunlop has been very smooth, and a great experience. We are very excited about our project in Hialeah, which we believe is going to open up a new era and lifestyle for the city."

One of the largest Spanish-speaking communities in the country, 96.3 percent of Hialeah residents reported speaking Spanish at home in 2016. The city also has the highest percentage of Cuban and Cuban American residents of any city in the United States, at 73.37 percent of the population, making the Spanish language an important part of daily life in the city1.

Shoma Village Apartments will be designed with the spirit of Hialeah in mind, featuring smaller, 'smart-efficient' units and upscale accommodations at affordable prices. Community amenities will include a 7,300 square-foot clubhouse, a pool, and a large club room with social areas, large screen televisions, a game room, and business center with private offices.