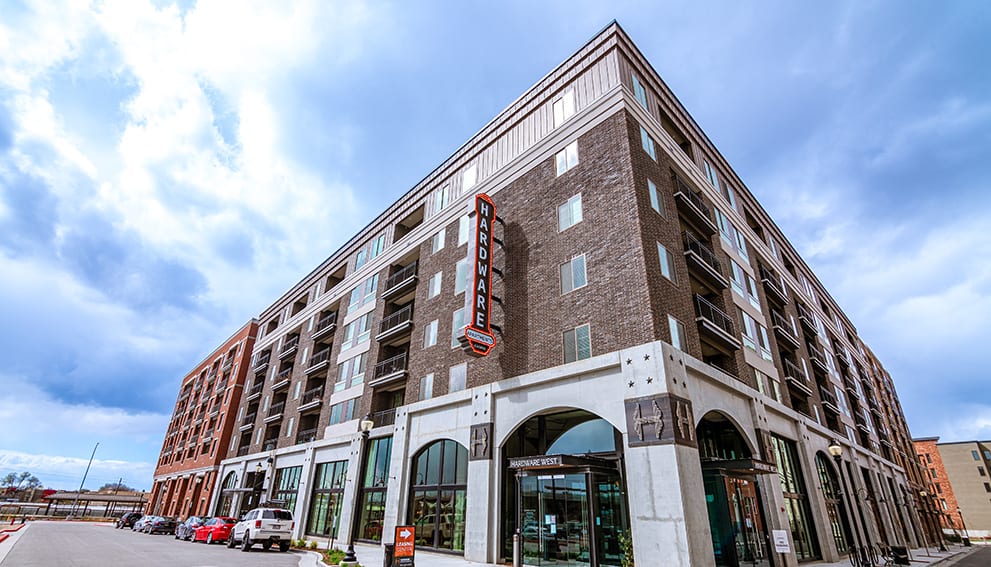 SALT LAKE CITY, UT - KBS, one of the largest investors in premier commercial real estate in the nation, announced that it has sold Hardware Apartments, a 463,956 square-foot, Class A luxury resort-style apartment community in the Salt Lake City real estate market. The property, owned by KBS Real Estate Investment Trust III, was sold in an off-market transaction to Oakmont Properties for an undisclosed amount.

KBS and Salt Development began ground-up construction on the 453-unit multifamily property in mid-2016 with the first phase of 267 units – Hardware West – being completed for the asset in June 2018. The sale was concluded shortly after Phase II was completed on Hardware East, which comprises the remaining 186 units of the community. Hardware Apartments is situated in Hardware Village adjacent to the historic Salt Lake Hardware Building, which is also part of the KBS portfolio.

The development project represents KBS’ extensive understanding of the Salt Lake City market and the firm’s ability to leverage its deep expertise in markets throughout the country, according to Rod Richerson, regional president, Western United States for KBS.

“We are very strategic about when and where we do ground-up construction but being active investors for well over a decade in the market we thought this would be a successful venture,” says Richerson. “We have several office assets in Salt Lake City, including the Salt Lake Hardware Building, 222 Main, Millrock Park and Parkside Tower. Considering how hard it is to close deals during the current economic environment this sale was a major accomplishment but we worked diligently with the buyer over the last couple of months to see it through. We hit a particular challenge when they lost their lender at the last moment so KBS provided short-term market rate seller financing to help Oakmont Properties complete the transaction.”

According to CBRE’s office report in Q1 2020, the Salt Lake City-Provo office market absorbed 196,654 square-feet on net – a high for Q1 over the past two years. The abundance of incoming supply (over 3.0 million square-feet) with substantial preleasing reaffirms that there is still strong confidence in the Salt Lake-Provo marketplace.

A state-of-the-art fitness center, yoga room, and a resort quality rooftop lounge with an infinity pool are among the luxury common amenities at the property, making it one of the highest-level amenities packages in the area, according to Helgeson.

“This development’s leading design and unparalleled urban finishes showcase the depth of attention KBS pays to every aspect of the properties in its client portfolio,” says Helgeson. “We have seen a ramp up in leasing tied to the recent completion of construction on the second phase of this unique community.”

KBS partnered with local developer SALT on the development of this project. “Hardware Village’s ideal location, combined with KBS’ deep knowledge of the Salt Lake City market and unparalleled track record of successful properties in downtown areas throughout the country, encouraged us to partner with the firm on this project,” says Thomas Vegh, president and CEO of SALT. “KBS left no stone unturned in ensuring that Hardware Apartments would be a multifamily community of the finest quality in downtown Salt Lake City, which made the partnership a win-win for both companies.”

Hardware Apartments is located steps from the TRAX light rail, Downtown Salt Lake City, Trolley Square and Liberty Park, and is connected to all major thoroughfares, employment centers, arts and entertainment in the Salt Lake City market. The property is within walking distance of restaurants, shops and retail stores.

“We immediately recognized the value of this asset for its high-end amenities and prime location,” says Ryan Ashley of Sacramento, California-based Oakmont Properties. “Hardware Apartments is prominently positioned in the robust downtown Salt Lake City market to create an elegant living experience unlike any other in the area.”

“We were very pleased to represent KBS in what was a truly a unique disposition of Hardware Apartments.” said Fischer, Greenberg Traurig’s Chair of the West Coast Real Estate Practice and Co-Managing Shareholder of the Orange County Office, who led the Greenberg Traurig team.