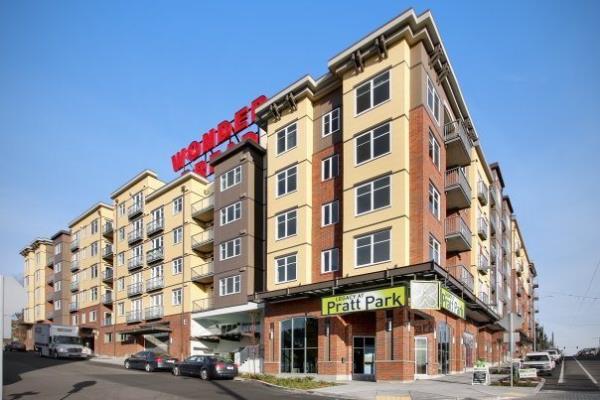 SEATTLE, WA -Security Properties and Rockwood Capital purchased Legacy at Pratt Park, a 249-unit mixed-use property with 6,720SF of retail located in Seattle, WA. The property was built in 2009 in the heart of the Central District.

Legacy at Pratt Park is strategically located at the intersection of S. Jackson Street and 18th Ave in Seattle's Central District. The property is within one mile of the Seattle CBD (over 60 million square feet of office space) and First Hill (over eight million square feet of medical, healthcare and research facilities) all accommodating over 300,000 jobs. The site also sits on a major bus route and is just four blocks from the Seattle Streetcar, allowing residents to easily commute without the need of a car. The future Link Light Rail Station on I-90, scheduled to open in 2023, will also be walking distance from Legacy at Pratt Park, offering excellent access to the Eastside and Greater Seattle Region. Other key locational advantages include the proximity to a neighborhood retail center just two blocks east and Seattle Universityto the northwest.

According to Davis Vaughn, Senior Director at Security Properties, the acquisition was made because, "we focused on the opportunity to buy quality in that we are getting one of the few light-gauge steel midrise buildings in the city.   This, combined with the potential for neighborhood growth given the proximity to jobs and amenities from the Central District, should result in strong returns for our investors."

"Legacy at Pratt Park fits well with our overarching investment thesis that an asset's surroundings drive an investment's performance over time as much as, if not more than, the asset's inherent physical attributes," says Matthew Friedman, a Director with Rockwood Capital. "The asset's light gauge steel construction and attractive floor plans combined with access to both immediately adjacent outdoor space and numerous transportation options drew us to this opportunity, and we are very excited to contribute to the submarket's continued evolution by executing our value-add program to the units and common areas."