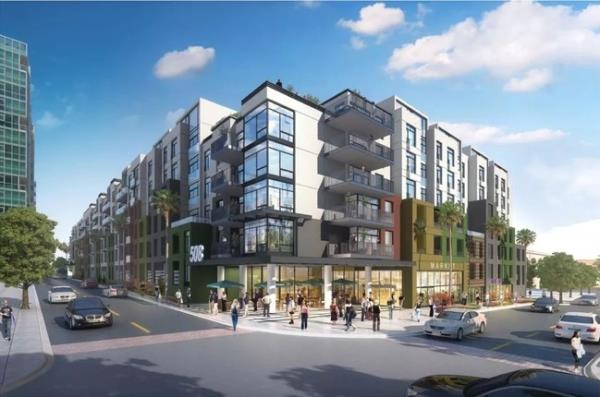 LOS ANGELES, CA - Starwood Capital Group, a global private investment firm focused on real estate and energy investments, announced that a controlled affiliate has formed a joint venture with Holland Partner Group to acquire and develop a Class A multifamily project, 550 Harborfront, in San Pedro, CA, an emerging coastal neighborhood in the South Bay of Los Angeles. Starwood and Holland expect to complete the Opportunity Zone development in the Spring of 2020.

550 Harborfront will consist of 375 units in a seven-story, podium-style community with 37 studios, 177 one-bedroom units, 139 two-bedroom units, 20 three-bedroom units and 2 four-bedroom units. Additionally, the property will offer residents top-of-the-market finishes and a comprehensive amenity package consistent with market standard Class A multifamily developments throughout Los Angeles. Tenant amenities will include a two-story fitness center, resident lounges, a pool and a rooftop lounge with outdoor kitchens and barbecue stations, which are collectively expected to attract young professionals and families. Located at 550 South Palos Verdes Street, 550 Harborfront is well situated at the intersection of the waterfront and San Pedro's commercial district, and within one mile of the 110 Freeway providing convenient access to Downtown Los Angeles and other major employment centers.

"We are excited by the opportunity to develop the first Class A multifamily property in San Pedro since 2008," said David Baker, Senior Vice President at Starwood Capital. "550 Harborfront is well positioned to capture demand given its coastal location and accessibility, over $1 billion of ongoing investment into the adjacent waterfront and ports, and relative affordability in the context of persistent housing shortages and rising rents in LA's core infill neighborhoods."