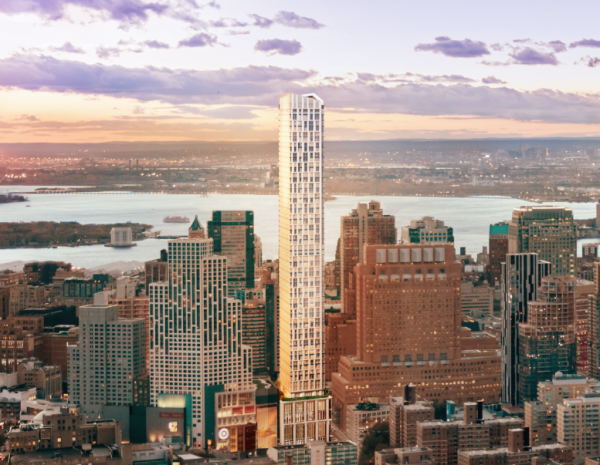 BROOKLYN, NY - Nationally acclaimed real estate firm Extell Development Company announced that the company's first Brooklyn project, Brooklyn Point, has reached a major construction milestone. Rising to 720 feet high, the 68-story building has cemented the title as the tallest building in Brooklyn. Construction is progressing on schedule at Brooklyn Point and first closings are slated to commence in early 2020. The tower offers a new level of luxury living in the borough and an unmatched 25-year tax abatement. It is the first and only for-sale building at City Point, which is the largest food, shopping and entertainment destination in Brooklyn.

"As the tallest building in the borough, Brooklyn Point represents a milestone for Brooklyn. The Brooklyn marketplace now competes with Manhattan and has significant demand for Extell quality homes," said Ari Alowan Goldstein, Senior Vice President of Development at Extell. "We are experiencing tremendous success because our buyers appreciate the value of outstanding design, amenities, and unparalleled views coupled with the savings of a 25-year tax abatement."

Located in Downtown Brooklyn, the skyscraper is designed by Kohn Pedersen Fox with interiors by AD100 designer Katherine Newman. Offering a mix of studio to three-bedroom residences, the luxury homes have been curated to reflect a sophisticated design aesthetic that combines art and utility, resulting in a modernist sensibility that embraces and reinterprets the past.

"At Brooklyn Point, we wanted to honor the creative spirit of Brooklyn, while crafting a new landmark for the borough's downtown," said KPF Design Principal Rob Whitlock. "To that end, we picked up on the diversity of scale and texture of the site's context in the building's expression. Brooklyn Point features a sculptural façade, with an eclectic materiality that plays with light and shadow, giving the tower an elegant solidity."

Adding to the building's allure is an unprecedented array of lifestyle amenities and services spanning over 40,000 square feet. The building's roof will feature the highest residential infinity pool in the Western Hemisphere, offering breathtaking views of the Manhattan skyline. Adjacent to the pool is a landscaped rooftop retreat outfitted with a sundeck, al fresco dining areas, changing rooms, showers and an outdoor movie screening space.

The property will feature a comprehensive health and wellness facility with a 65' indoor saltwater swimming pool, 35-foot rock climbing wall and yoga studio, Pilates and cycling studios, and a squash/basketball court. To complement residents' wellness experience, Brooklyn Point's spa will also include an infrared sauna, men's and women's steam rooms, and hot tub.

Located at City Point, a 600,000-square-foot mecca of retail, dining and entertainment amenities, Brooklyn Point residents will have access to everything this neighborhood destination has to offer.  City Point is home to a Trader Joe's market, Target, Century 21, Alamo Drafthouse movie theater, and DeKalb Market Hall, an epicurean food hall with over 40 vendors, including Katz's Deli, Ample Hills Creamery, Pierogi Boys, and more.  Brooklyn Point is close to 11 subway lines and will be across the street from the new 1-acre Willoughby Square Park.