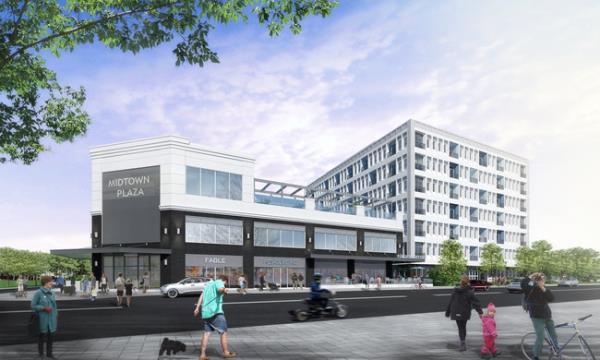 When complete in early Summer 2020, Midtown Plaza Phase 1 will add 107 luxury 1 and 2-bedroom apartments to the rapidly growing Midtown area. The project owner is Kartel Capital of Beverly Hills, CA. Cohen-Esrey is the project developer and an affiliated company, Construction Technologies, is the general contractor. Construction financing is being provided by Arvest Bank and was arranged by John Perlik and Don Coleman of CBRE|Capstone, Kansas City. Construction is slated to begin next week.

Midtown Plaza, Phase 1, is located at 3420 Broadway Blvd. in Kansas City, MO and represents the first phase of a multi-phased project that will eventually include Phase 2 consisting of commercial retail, office space and a rooftop restaurant, Phase 3 additional luxury apartments, and Phase 4 townhomes. Phase 1 will include 107 apartment units consisting of contemporary 1 and 2-bedroom floor plans, an on-site fitness facility, ample parking for all units and an outdoor activity space.

The project is within a few minutes and walking distance to a variety of amenities, such as Metropolitan Community College, retail stores, restaurants, supermarket, hospital/medical facilities, public transits, and local parks. The project's proximity to Downtown Kansas City, The Country Club Plaza, and Westport will allow residents to easily access all attractions in neighboring cities.

"This project has been a vision of mine over the years," said Joseph Kashani, CEO of Kartel Capital, "and now it's finally coming to fruition. We're excited to start the first phase and are equally excited about the long-term future of all four phases of this project."

Tom Anderson, Managing Director of Cohen-Esrey Development Group, also expressed enthusiasm about the project: "The Midtown area is the next logical Kansas City neighborhood for multi-family development and this project fills a really important niche in the market. We're honored to have been selected by Mr. Kashani to help him develop Midtown Plaza."

Kashani purchased the property in 2008. Plans began to be laid for an apartment conversion in 2016. Kashani and Anderson met soon after. After several iterations, the current plan finally came into clarity and the closing on the construction loan occurred this week, enabling the project to proceed.

"I truly believe that local residents will connect with this project as it will serve the community with quality residential apartments and cutting-edge retail in subsequent phases," said Kashani. "It's been a long road but, in about a year, we'll have our first residents moving in."