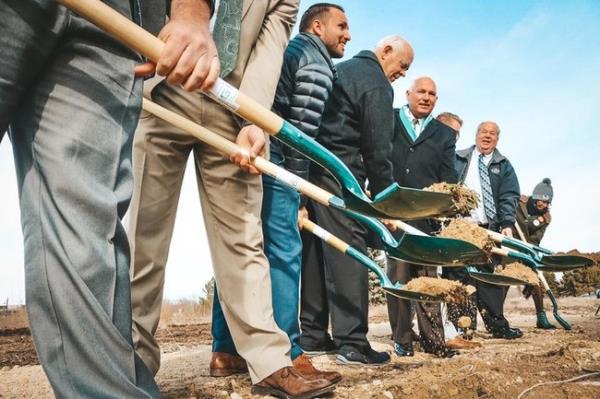 Once complete, The Green on Campus Drive will consist of five buildings with 1,605 beds, single-occupancy rooms for the residents, a parking structure and unique amenities to the area. Additionally, as part of the joint venture between developers PEG and Woodbury Corporation, the project will include the donation and construction of a pedestrian tunnel to allow for direct walkable access to campus, which will significantly reduce traffic congestion around the university – an area known for transportation gridlock and frequent crashes.

While construction was originally scheduled for Fall 2017, the project was delayed when a group of nearby residents attempted to ban the land rezone required to build The Green on Campus Drive. Despite the opposition, Orem voters approved Proposition 5 during the November 2018 election period, granting approval for the development to move forward.

The UVU Student Housing Project began years ago when former UVU President Matthew Holland approached PEG asking for help solving a major issue facing the university – a severe shortage of student housing. Market research shows current student housing facilities around the university collectively accommodate for less than 13 percent of the 39,931 students enrolled, forcing a large majority of UVU students to commute from across the Wasatch Front or independently find their own lodging away from campus.

"We truly appreciate PEG and Woodbury's commitment to building a student housing complex on this land," said UVU President Astrid S. Tuminez. "This student housing development will look, feel and function like on-campus housing and allow our students the benefit of easily accessing the services, programs and activities of our university."

"While building a housing community that allows for an easy, safe walk onto campus was always our number one priority, we are proud to have created a development that will also improve traffic, reduce Orem City's carbon footprint and help UVU come closer to completing its master plan," said Soren Halladay, chief investment officer at PEG.

With full support from the UVU Board of Trustees, the students of UVU, Orem City Council members, the Alpine School District and valued community members whose votes have brought the project to fruition, PEG and Woodbury Corporation wish to thank everyone involved for making continued education in the Intermountain West a priority.

"This project has always been about helping students. There isn't enough purpose-built student housing at UVU. This will be a great thing for Orem and UVU," said E. Taylor Woodbury, chief operating officer at Woodbury Corporation.

Cameron Gunter, chief executive officer at PEG, adds further, "We are not just building a place for students to live – we are building a community where they can easily and fully experience the unique energies of campus life."

The first three buildings of The Green on Campus Drive are tentatively scheduled to open in Fall 2020, with the remaining two buildings to follow in Fall 2021. PEG and Woodbury Corporation look forward to working with R&O Construction as the general contractor and with Humphreys & Partners Architects on the design.