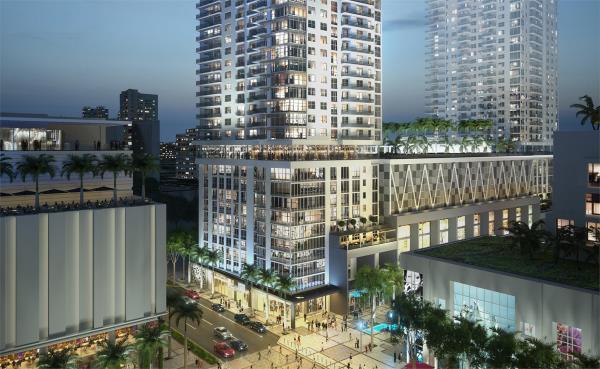 MIAMI, FL - CIM Group announced that it has completed construction of CAOBA, a 444-unit apartment tower located at Miami Worldcenter, the 27-acre mixed-use development in downtown Miami. The 43-story building is the first tower to open at the $4 billion mixed-use Miami Worldcenter development, one of the largest urban development projects underway in the country.

CAOBA, which just received a Temporary Certificate of Occupancy allowing move-ins to begin, offers residents a range of apartment types, from studios to three-bedrooms. The tower features an array of modern amenities sought after by residents in Miami’s urban center including a resort-style pool deck with downtown and ocean views, a fitness center, a club room with a fully-equipped chef’s kitchen, and pet-focused facilities including a dog-walking lawn and a dog-wash area. CAOBA also includes more than 15,000 square feet of ground-floor retail space for shops and restaurants, connecting to Miami Worldcenter’s retail promenade and plaza currently under construction. Plans for an adjacent 40-story, 429-unit tower have been approved by the City of Miami.

CAOBA at Miami Worldcenter is also two blocks south of I-395, linking downtown Miami’s Central Business District with its Arts & Entertainment District, a hub for culture and entertainment, and other regional destinations such as the Miami International Airport.