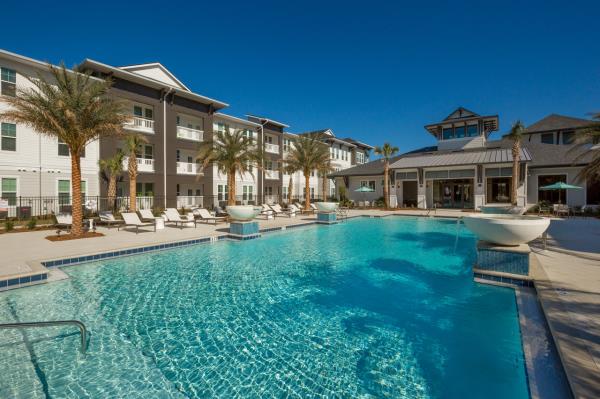 The apartment community is located in the Crestview-Fort Walton Beach-Destin MSA, which boasts the lowest unemployment rate in the state of Florida, according to the U.S. Bureau of Labor Statistics.  Additionally, the MSA posted some of the most consistent and lowest state-wide MSA unemployment rates over the last ten years, and remained especially strong through the downturn, according to Colin Gillis, Vice President of Acquisitions for Passco.

“Destin has experienced strong and consistent year-over-year job growth in addition to recording the highest nonfarm payroll employment growth in the entire state of Florida,” says Gillis. “This influx of new jobs is driven largely by the leisure and hospitality increases in the market, expansions in medical and education sectors serving the explosive population growth, and large increases in defense spending, benefitting the three military bases in the area, including Eglin AFB, one of the largest military installations in the world. Collectively, these military facilities employ nearly 100,000 personnel.  Large technology and defense contractors have also expanded in the region including companies such as Boeing, BAE Systems, Lockheed Martin and L3 Technologies.”

Sea Glass Apartments is located in the heart of the “Emerald Coast,” known for its white-sand beaches and emerald green waters, attracting more than four million visitors each year. The apartment community is located in the Okaloosa County School District, which is ranked second in the state of Florida, as well as within walking distance of primary retail destinations, and directly across from Henderson Beach State Park, which includes 6,000 feet of natural scenic shoreline along the Gulf of Mexico.

“Sea Glass is a one-of-a-kind project in an excellent location within a market that has exhibited huge pent-up demand for luxury multifamily product. The property leased up at a record pace, reaching 100% occupancy in less than seven months with no concessions.  Effective rents at the property are extremely impressive, and in many cases, they exceed rent levels for similar luxury assets in the more well-known Florida markets like Tampa and Orlando.  Additionally, the barriers-to-entry in this market are very strong on all fronts – physical, political and financial,” added Gillis.

“Sea Glass Apartments is an exceptional asset and we are glad that we had the opportunity to work with the Passco team on this deal,” says Rob Meyer, Partner at Catalyst Development Partners. “Their entire team made the process seamless, and we know this property will be an excellent addition to their portfolio.”

The apartment community is located at 4320 Commons Drive West in Destin, Florida. It features a mix of studios, one-, two-, and three-bedroom floorplans. The JLL Florida Capital Markets team of Matt Wilcox, Jubeen Vaghefi and Denny St. Romain brokered the transaction.