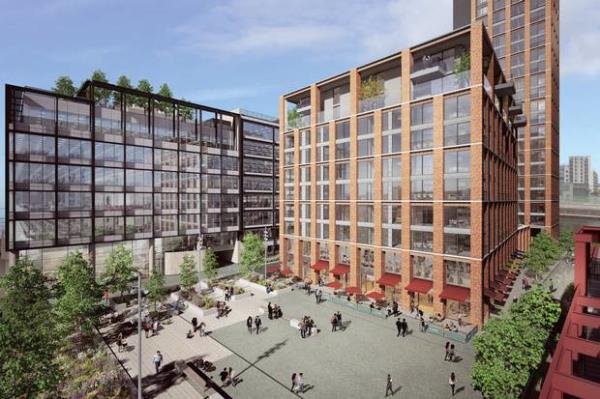 DUBLIN - Global real estate investment company Kennedy Wilson and its equity partners reached a new milestone with the completion of Capital Dock, one of the largest mixed-use developments ever created in Ireland, that is transforming Dublin’s South Docklands. The iconic city campus development spans 4.8 acres, providing over 690,000 square feet of new mixed-use space, including offices, retail and multifamily units, as well as more than 1.5 acres of public park space that will soon serve thousands of people.

Through the build out, approximately 1,300 construction workers were based onsite, with the development expected to support hundreds of permanent jobs when fully built. Over 200,000 tons of concrete, 15,000 tons of steel and 7,500 panes of glass were used during construction.

The community has already begun welcoming some of the biggest names in tech and finance that will serve as the foundation to energize the new campus. J.P. Morgan, a Fortune 50 bank, and the world’s #1 jobs site, Indeed, have committed to occupy all of the available office space, and are preparing their new offices for occupancy in 2019.

This past week, Ireland’s Minister for Finance and Public Expenditure and Reform, Paschal Donohoe TD, joined Kennedy Wilson and NAMA in the penthouse of the newly completed 22-story multifamily tower that is the country’s tallest residential building and serves as the gateway to the community. The group marked the launch of the multifamily building and the introduction of a new standard of services and amenities to the Dublin rental market. Beginning in January 2019, the 190 multifamily units will be available to rent, with five-star resident amenities, dedicated on-site concierge, resident lounges, cinema, professional gym, business suites and chef’s kitchen.

The amenities extend to the public realm, including a landscaped park and square that include designated cultural space along Grand Canal Docks. The project will also welcome new retailers in the coming year, including a flagship restaurant and bar with a terrace, a gourmet grocer and additional artisanal food and beverage offerings.

“We are so proud of what the team has accomplished here in Dublin at Capital Dock with what’s been our largest scale development to date, and to deliver high-quality residences within such a vibrant market,” said William McMorrow, Chairman and CEO of Kennedy Wilson. “When we began conceptualizing Capital Dock years ago, we envisioned creating a new heart for the Docklands that brought people together in modern work spaces and beautiful outdoor areas, while raising the bar for residential rentals. To see the area come to life and our vision come to fruition is incredibly satisfying and reinforces the exciting future of the Docklands and the greater Dublin market.”

Speaking at the completion ceremony, Minister for Finance and Public Expenditure and Reform, Paschal Donohoe TD said, “Kennedy Wilson’s Capital Dock is a significant development, creating critically needed commercial and residential space in the growing South Docklands. The diverse Capital Dock campus fits well with Dublin’s long-term future as an innovative and successful European city, at the heart of modern Ireland. Projects like Capital Dock are key components in increasing the supply of private, rented residential units in the city and also in attracting FDI to Ireland.”

While the completion of Capital Dock marks the end of Kennedy Wilson’s five-year development journey to bring the project to life, it is the beginning of its exciting asset management program for this landmark city campus. Kennedy Wilson and an equity partner took direct ownership of the site in mid-2013, secured zoning approvals and joined with NAMA in December 2014, a year before breaking ground on the site in November 2015 and the start of vertical construction in September 2016.

Kennedy Wilson is one of the most active real estate investors and operators in Ireland, with significant development underway across €1.0 billion of assets throughout the country, including more than 1,300 new multifamily units in various stages of development on prominent Dublin projects including Clancy Quay, The Grange and City Block 3.