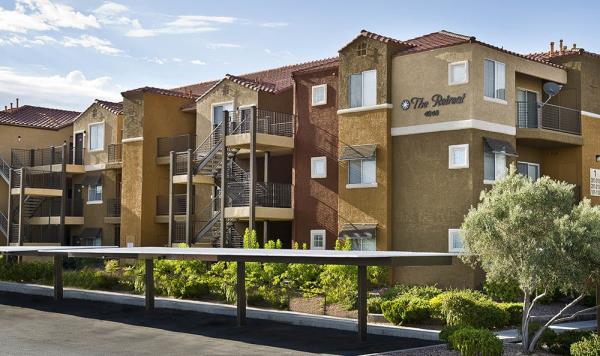 “By leveraging our significant presence in this market, we can take advantage of economies of scale, to cost-effectively improve the appearance and amenities and achieve operational efficiencies at both properties,” said TruAmerica’s Director of Acquisition Zach Rivas, who led this acquisition effort. “Our renters will benefit from living environments comparable to newer product in the market, yet at rents which are affordable for working Las Vegas families.”

In addition to increasing its footprint in one of the most dynamic multifamily investment markets in the country, the Los Angeles-based real estate investment firm seized the opportunity to team up with two equity partners with whom they had successfully aligned with in the past.

Acquired in partnership with Cleveland-based Citymark Capital, The Retreat is a 120-unit multifamily community in East Las Vegas. Built in 1996, the community features a mix of one-, two-, and three-bedroom apartment homes.  Each unit features nine-foot ceilings, full-size washers/dryers, walk-in closets, and private balconies or patios. It is TruAmerica’s second joint venture with Citymark, who earlier this year partnered to acquire Central Park, a 362-unit multifamily community in Orlando, FL.

“The acquisition of The Retreat is a perfect fit for our national apartment investment platform,” said Dan Walsh, founder and CEO of Citymark Capital.   “Citymark’s unique platform provides investors with access to strong apartment investment opportunities across the United States, like The Retreat, by partnering with top operating companies like TruAmerica.”

Crossing at Green Valley, is a 384-unit multifamily community in Henderson which was acquired in partnership with an institutional investor.  Built in 1986, Green Valley features a mix of one- and two-bedroom apartments, each with full-size washers/dryers, walk-in closets and private balconies. The property’s grounds include two swimming pools, two spas, a fitness center, barbecue areas, a playground and a dog park.   It is the fourth investment with this institutional investor, which includes Montego Bay, a 420-unit community in Henderson acquired in 2016.

Occupancy in Las Vegas has averaged 95 percent over the last 12 months and rents have grown by an average of roughly 5.5 percent since 2015, according to research firm Axiometrics. The market also saw employment growth of 3.4 percent over the past 12 months. And with just 6,400 new rental units having been delivered since 2012 according to Fannie Mae, the need for affordable multifamily housing remains high.

“We like the long-term outlook for Las Vegas based on positive demographics and the high demand for rental housing and will continue to be net buyers,” added Matthew Ferrari, Senior Managing Director of Acquisitions for TruAmerica.

Both properties will benefit from a multimillion capital improvement program that will include interior renovations as units become vacant, upgraded common area amenities, as well as new paint, signage and landscaping to improve curb appeal.

Charlie Steel, John Cunningham and Darcy Miramontez in the Phoenix office of JLL represented the seller, Acacia Capital and TruAmerica in the transaction.