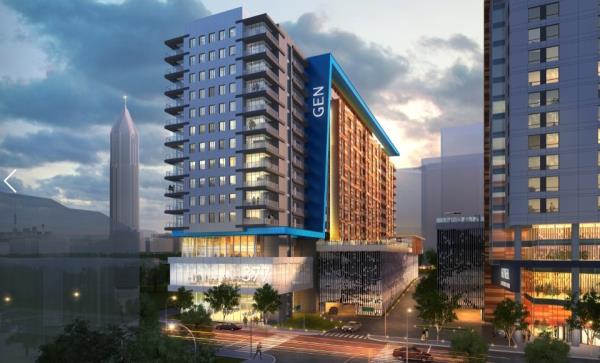 ATLANTA, GA - Mayor Keisha Lance Bottoms joined nearly 100 dignitaries and guests to celebrate noted developer, Kaplan Residential (Kaplan) for the groundbreaking of Generation Atlanta, the first development in Atlanta to utilize a light gauge steel panelized system called Prescient. Slated to open in 2020, Generation Atlanta will be located at 377 Centennial Olympic Park Dr., minutes away from some of the city's most notable landmarks, including the World of Coca-Cola, National Center for Civil & Human Rights, Georgia Aquarium and Mercedes-Benz Stadium, as well as more than 400 restaurants and thousands of offices.

Generation Atlanta will be the first building in the city to utilize the Prescient structural system. The technology will reduce construction costs by 20 to 25 percent, compared to using concrete, enabling the development to comply with the City of Atlanta's initiative to provide more affordable housing.

"We're thrilled to be launching Generation Atlanta in such a vibrant area like Downtown," said Nathan Kaplan, partner at Kaplan Residential. "This development couldn't have come at a better time as the city is gearing up for major renovations to some of its most beloved landmarks like the Georgia Aquarium, State Farm Arena (formerly Philips Arena) and Centennial Olympic Park."

The 17-story high-rise sits on 1.5-acres and will offer first-class amenities including duckpin bowling, shuffleboard, a pool deck with trellis area and firepit, fitness center with state-of-the-art equipment, yoga studio, rooftop lounge with outdoor theatre as well as an indoor sky deck with a multi-screen theatre. The 336-unit development will offer studio, one-bedroom and two-bedroom floorplans, ranging in size from 616 square-foot studios up to 1,270 square-foot two-bedrooms.

"We've been bullish on Atlanta for more than 30 years," said Morris Kaplan, chairman and CEO at Kaplan Residential. "I had the privilege to work with Mayor Andrew Young for our first Downtown projects, and now the next generation of Kaplans, my son, Nathan, is spearheading Generation Atlanta with Mayor Bottoms."