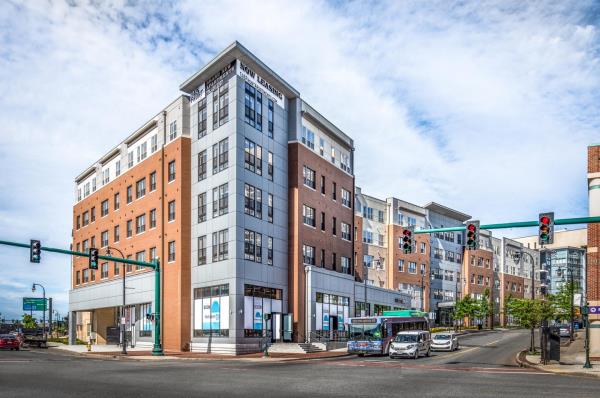 WORCESTER, MA - Roseland Residential Trust, a subsidiary of Mack-Cali Realty Corporation, and an owner, manager, and developer of luxury lifestyle-oriented multifamily and mixed-use properties, celebrated the official opening of 145 Front at City Square, a new collection of studio, one- and two-bedroom luxury apartment homes in Downtown Worcester. Roseland executives were joined at the event by Worcester city officials, including Mayor Joseph Petty and City Manager Edward M. Augustus, Jr.

A key component of a $565-million, master-planned development that is bringing more than 22-million square feet of commercial, medical, retail, entertainment, and residential space to the area between City Hall and Union Station, 145 Front at City Square features 365 residences, complimented by a curated mix of amenities and 10,000 square feet of ground-floor retail space. Roseland designed the property to cater to residents who value open floor plans that allow them to tailor their living areas and entertain in modern comfort.

"We're thrilled to celebrate the opening of 145 Front at City Square, a premier apartment community that sits right at the center of Worcester's vibrant and continuously evolving downtown, and within steps of a growing roster of restaurants, nightlife, and retail options," said Gabriel B. Shiff, Chief Operating Officer of Roseland Residential Trust. "This property offers a level of luxury finishes and amenities that is truly unrivaled in Worcester, and it has been extremely exciting to see the community come to life as more and more residents move into their new homes here."

As the desirability of Downtown Worcester continues to grow, 145 Front at City Square has been especially attractive to Worcester's growing workforce in the advanced manufacturing, information technology, biotechnology, and healthcare sectors.

Part of a public-private development project that is driving a dramatic transformation of the city, 145 Front at City Square is located adjacent to Worcester's Union Station, which provides multiple transport options, including Massachusetts Bay Transportation Authority (MBTA) trains, Amtrak, and MBTA, which offers service to Boston's South Station in approximately 90 minutes.

The community is reflective of Roseland's focus on developing in select transit-oriented markets throughout the Northeast – a strategy that's also apparent in East Boston, where the company is developing Portside at East Pier – a master-planned, mixed-use waterfront development of 550 luxury apartment homes and retail space.