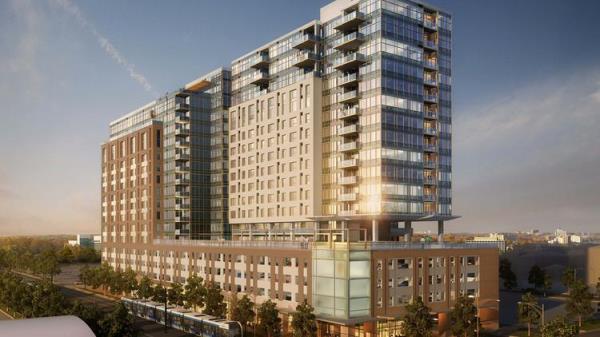 DENVER, CO - One of the more anticipated multi-family residential construction projects, Radiant, in downtown Denver topped out on Thursday. Project general contractor The Weitz Company celebrated the milestone with developer LMC, A Lennar Company, by hosting a lunch for over 400 trade partners and project stakeholders at the jobsite.

“Our employees and trade partners have worked extremely hard, especially through the winter months, to reach this milestone. Topping out was an appropriate opportunity to acknowledge their efforts before concentrating our focus on the interior of the building,” said The Weitz Company Executive Vice President and General Manager Bruce Porter.

Radiant is an 18-story, 329-unit luxury apartment high-rise being constructed at the entrance of the rapidly expanding Welton corridor between 21st Street and 22nd Street. The structure, which will span over 486,000 square feet when finished, was erected using post-tensioned, cast-in-place concrete with slab-on-grade and drilled caisson piers. It took 30,000 yards of concrete, 140 miles of post-tensioned cable and 1,400 tons of rebar to pour the building’s 18 decks.

Being constructed in a constrained section of the Arapahoe Square district, Radiant is positioned right on the L Route of the RTD Light Rail System, which will provide future residents easy access to transportation.

Other features being built into Radiant include an amenity deck with a pool and hot tub on the fifth floor; a fitness center and a patio on the sixth floor; club room on the 17th floor; and a four-level parking garage.

“Downtown Denver is becoming more vibrant by the day, and we’re thrilled to join one of Denver’s most emerging neighborhoods,” said Scott Johnson, division president for LMC. “We believe Radiant’s world-class design, high-end finishes and unmatched variety of prime amenities will be a unique addition to the neighborhood and create an unparalleled living experience for our residents.”

The project, which is being designed by RNL, is scheduled to be completed in June 2019.