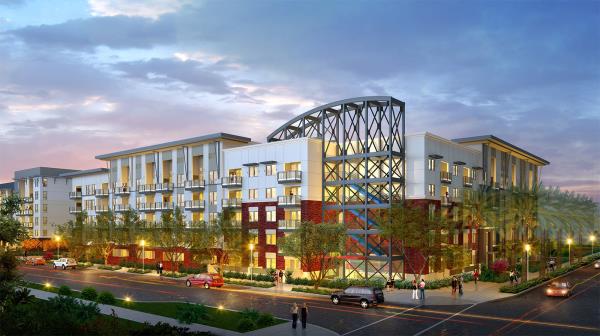 ANAHEIM, CA - LMC, a leader in apartment development and management, announced the start of leasing of Core, a luxury apartment community located in the Platinum Triangle district of Anaheim.

The five-story community, which contains 400 apartment homes, features a commuter-friendly location and expedient access to many of Anaheim's key attractions. Core joins a Platinum Triangle area that has morphed from an industrial site to a desirable urban locale with newly developed housing, office space and retail. First move-ins began June 1.

"Platinum Triangle is one of the hottest and most emerging districts in Orange County, and we're thrilled to be a part of it," said Ryan Gatchalian, division president of Southern California for LMC. "We believe Core, from its aesthetic design, top-of-the-line amenities and tech-related features, will provide a comfort and convenience that serve as a perfect fit for those moving to a new, on-the-rise neighborhood."

Situated at 1815 S. Westside Drive, Core sits within a short drive of local attractions such as Disneyland, Angel Stadium, House of Blues and the Honda Center, home of the NHL's Anaheim Ducks and high-profile concerts and events. The community also boasts prime access to Interstate 5 and California State Routes 22 and 57, which provide connectivity to the greater Los Angeles area and beyond. In addition, the Anaheim Regional Transportation Intermodal Center (ARTIC), with train, Metrolink, bus and other transportation services is located just over a mile from the community.

Residents also have access to the "stlt" suite of amenities, which include an exclusive co-working lounge with private offices and conference capabilities; a state-of-the art fitness and training center with motivational Fit Wall; and Lennar Dream Suite by Lutron, which provides the ability to control automated shades, lights and thermostat from a smartphone. Additional community amenities include a resort-style pool with chaise lounges, outdoor sports bar with TVs, spa retreat with day beds and resident lounge with catering appliances. Residents also have access to electric-vehicle charging stations and 24-hour digital package lockers.

Core will join the five apartment communities LMC has developed in southern California. Others include Malden Station(Fullerton), Olympic & Olive (Los Angeles), The Colony at the Lakes (West Covina), The Highland Residences (Hollywood) and Shift (San Diego; to open in June). Three others are currently under development, including Marisol, Luma and Oceanaire. Two others, North Park and Symphony, are slated for future development.