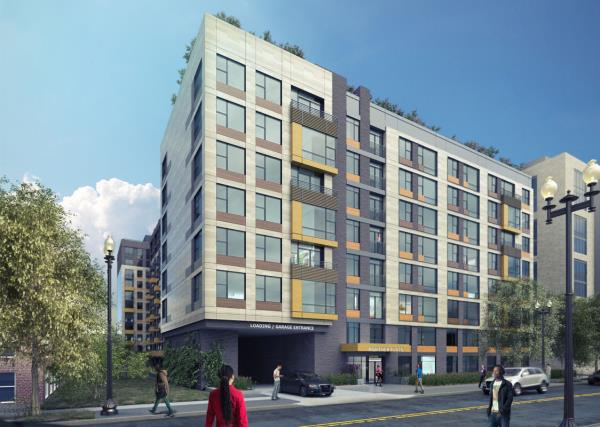 Portner Flats is an eight-story, 96-unit, 100% affordable housing development built on the site of the dilapidated Portner Place development at 1440 V Street NW.  It was developed by a partnership between Somerset Development, the Jonathan Rose Companies, and New Community Partners. The high-rise building offers affordable two and three-bedroom units along with studio and one-bedroom units.

"We know that when we add housing units, we make DC more affordable, and when we preserve housing units, we make DC more affordable – this project does both," said Mayor Bowser. "As the District continues to grow, we will continue making the investments necessary to keep Washington, DC affordable for residents in all eight wards. The Portner Flats project is an extraordinary model of how we can use public-private partnerships to strengthen our community and create new opportunities for Washingtonians."

The D.C. Housing Finance Agency and the D.C. Department of Housing and Community Development aided in the financing and acquisition of the property. The District also rezoned the site for increased density, enabling the project to preserve the existing affordable housing and double the total number of affordable units.

Eric W. Price, Executive Vice President at the HIT and former DC Deputy Mayor of Economic Development under Mayor Anthony Williams, noted that in today's financial environment it takes creative solutions to fund affordable housing. "It is so important to put both public and private resources together to fund projects that support families and neighborhoods," Mr. Price said. "And it helps to have city leaders, like Mayor Bowser, and the team she has assembled, to leverage their resources to support affordable housing."

While overseeing development for the District from 1999 to 2004, Mr. Price was instrumental in transforming neighborhoods throughout the City and established funding for the City's Housing Production Trust which has provided over $1 billion in financing to affordable housing projects since its inception.

"As we experience economic growth we must continue to provide housing for all residents," Mr. Price said. "Long-time residents and their families must be part of the future."

Brent Booker, NABTU's Secretary Treasurer, was a key partner in ensuring this project was built by union hands.

"The two hundred craftworkers on this project made contributions into their pension funds, which can then make investments into the AFL-CIO Housing Investment Trust so that we can build more projects like this," said Mr. Booker.  "So to the residents returning home, know that you are living in a building where the highest skilled, best trained workers in the world built this building for you."

Jim Campbell, founding principal at Somerset Development, praised the union workforce which delivered the project "ahead of schedule and under budget."

"This has been a dream come true for the residents, and for the developers, funders and city officials, who have been committed to making this project a reality," Mr. Campbell said, citing the difficulty in producing affordable housing in urban settings. "This is a milestone. We have proven that it can be done, that we can provide affordable housing for families in a vibrant, urban neighborhood. Now we must get together and do it again, and again."