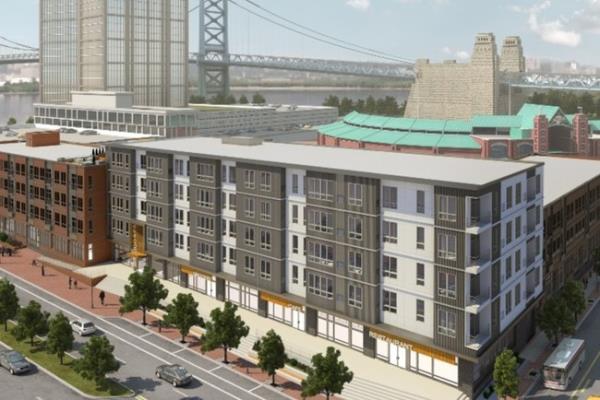 The first newly constructed market-rate apartment building to be developed on Camden’s waterfront in 15 years, 11 Cooper will offer both market-rate and affordable apartment homes to new families and young professionals looking to join the city’s growing workforce.

“Ten years ago – even five years ago – almost no one believed in Camden’s potential, and now look where we are today,” Mayor Frank Moran said. “The city has seen a remarkable turnaround – from a dramatic drop in crime to historic gains in our schools, to billions of dollars in new investment, including today’s announcement. Together, we are making Camden a real destination to live, work and play.”

CP Residential, which owns 11 Cooper, is a partnership between three companies: The Michaels Organization, NFI, and Conner Strong & Buckelew. The same three firms have announced they will be moving their headquarter offices to the Camden Waterfront in an office tower that is currently under construction just steps away from the 11 Cooper apartment community.

“Residents of 11 Cooper will enjoy waterfront living in beautifully designed, contemporary apartments and they will be at the center of the urban renaissance that is happening right now in Camden,” said John J. O’Donnell, president of The Michaels Organization, 11 Cooper’s managing partner.

“Our residents will have great access to transportation, entertainment, shopping, and the employment and educational opportunities of Camden’s renowned ‘Eds and Meds’ community. We could not be more proud to be part of Camden’s revival,” O’Donnell said.

“We couldn’t be more excited to see the end result,” said Timothy J. Lizura, president and COO of the New Jersey Economic Development Authority. “Together, 11 Cooper and the many other waterfront developments will provide the kind of economic boost that Camden has been awaiting.”

“With Philadelphia’s rising taxes and cost of living, Camden is looking increasingly attractive to young people – with the potential to become a new Hoboken,” said Senator Cruz-Perez. “We’ve made incredible progress over the past few years, and these new homes make room for a new generation to come and lay down roots.”

“The investment of private capital is critical to Camden’s future because it helps create jobs for city residents and newcomers alike,” said Freeholder Nash. “These new market-rate apartments are a major step forward in Camden’s progress and a clear sign its future is brighter than it has been in decades.”

It’s a future that M&T Bank, the sole lender for the project, has worked to be part of. “The progress being made in Camden is truly something to marvel at,” said Regional President for the Philadelphia and South Jersey region for M&T Bank Ira Brown. “At M&T Bank, we are committed to being a dynamic partner to those bettering the very communities we serve. It is a pleasure to see these plans come to fruition through the cooperation of invested partners.”

“At M&T Bank, we recognize the potential and future the Camden Waterfront holds for the South Jersey community,” said Di Santo. “As such, the bank has been committed to supporting this project and its sponsors, and we are thrilled to see it come to fruition to further Camden’s renaissance.”

11 Cooper will offer 156 modern apartments, in a mix of studios, one- and two-bedroom layouts, in the heart of the city’s booming waterfront district adjacent to The Ben Franklin Bridge. Twenty percent of the apartments will be designated as affordable for those earning 80 percent or less of the area’s median income. 11 Cooper will incorporate the latest green technology, high-end building materials and energy efficiency.

Planned amenities include a residential lobby with 24/7 concierge services, a business center, bike storage, a fitness center and club room with adjacent roof-top terrace. On-site parking will accommodate more than 190 cars. The spacious apartments will feature stainless steel appliances, quartz countertops, and spa-inspired bathrooms. Each residence will have its own in- unit washer and dryer. In addition, 11 Cooper will offer 5,000 square feet of street-level retail space, fronting Cooper Street.

The apartment community will begin lease-up in October 2018, with final delivery expected in Spring 2019.