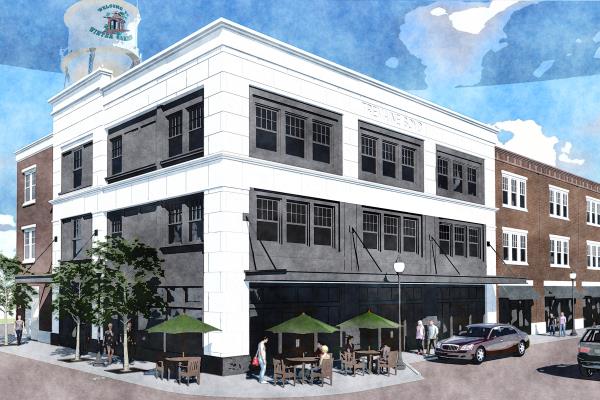 WINTER GARDEN, FL - The City of Winter Garden has issued permits for construction of Tremaine Boyd, a new mixed-use development on the Southeast corner of Tremaine Street and South Boyd Street. The Tremaine Boyd building will include twenty-two new residences within the city’s core, adding to the extremely popular downtown district. Central Florida’s most charming little city continues its rapid growth and revival with the groundbreaking of a three-story, 26,300 square foot, mixed-use building that will include two floors of luxury apartments above the ground floor of commercial space.

Conveniently located between the city’s iconic water tower and SOBO Art Gallery, the Tremaine Boyd exterior is designed to complement the historic architecture that exists throughout most of downtown Winter Garden, while the interior will boast a contemporary yet neo-traditional flare. All 22 of the building’s assortment of studio, one-bedroom, and two-bedroom apartments are spacious, and finished with urban-style amenities renters’ desire. The ground floor will feature more than 8,000 square feet suitable for restaurants (Pammies Sammies has already signed a lease), retail shops, and offices. Construction will commence this month with a targeted completion of Spring 2019.

The new commercial spaces are expected to increase foot traffic along S. Boyd Street, which will in turn improve walkability and help to boost the local economy. “You need people working and living in a downtown environment if you want it to be sustainable,” said City Manager, Mike Bollhoefer, who believes the addition of high-end apartments are important for the long-term viability of the downtown area.

Frank Starkey, President of People Places, LLC, one of three partners in the project, also believes the new development will further strengthen an already active downtown environment. “People are quickly figuring out that Winter Garden has one of Florida's greatest downtowns,” said Starkey. “Tremaine Boyd creates a unique opportunity to live right in the middle of it, making the building a natural fit.”

J&J Building, Inc., another partner, has been building new homes in Winter Garden and Oakland Park for several years, and President Jim Costello believes he knows what has made it one of Central Florida's fastest growing communities. “We recognize that people want a connection to a historic and vibrant downtown lifestyle. Tremaine Boyd will further the opportunity to make that connection by providing convenient downtown apartment living and adding to the expanding variety of restaurant and retail offerings,” said Costello.

The Tremaine Boyd mixed-use development is a short walk to the vibrant city offerings such as the Winter Garden Farmers Market, Plant Street Market, Crooked Can Brewery, Garden Theater, SOBO Art Gallery, the West Orange Trail, as well as popular shops, restaurants and musical enclaves that line the cobblestone streets of nearby Plant Street.

“Winter Garden has an authentic, walkable downtown that is rich in history and cultural vitality. The City’s leadership has done an outstanding job in preserving these qualities,” according to John Rinehart, third Tremaine Boyd partner. “We believe Tremaine Boyd will be a highly successful addition to an already thriving downtown.”