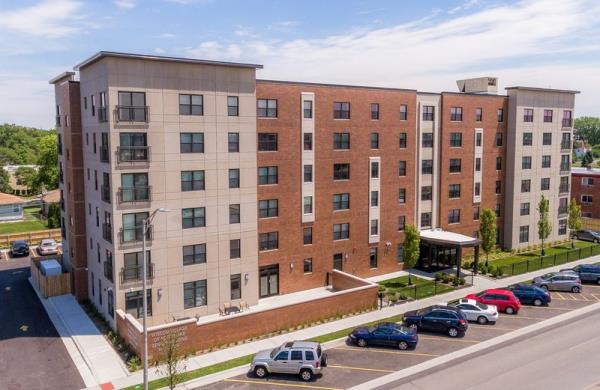 CHICAGO, IL - A new senior housing complex in the City of Northlake was among the stars of the Illinois Housing Development Authority (IHDA) annual awards at the Illinois Governor's Conference on Affordable Housing last month.

Wisdom Village of Northlake was recognized with the Gale Cincotta Award for Innovation and Excellence in Affordable Housing in metropolitan Chicago.

The development is a six-story elevator building with 71 mixed-income units, designed for the 55 and older demographic. The $20 million project was the result of a partnership between the City of Northlake and developer Turnstone Development, a not-for-profit organization focused on increasing affordable housing opportunities.

Turnstone Development executive director Bill Schneider said a great deal of gratitude for completion of the project should be extended to Lightengale Group, a financial consultant that worked on the tax credit application; Piekarz & Associates, the architecture firm; Burling Builders, the general contractor; Carlton Management Company, the property management team; and Turnstone's Board of Directors, for their guidance and support.

Wisdom Village of Northlake offers an abundance of communal areas including a community room with a kitchen and television, management office, laundry room on each floor, lounge, library and an outdoor area that includes picnic tables and grills. Each unit has new appliances, including a dishwasher, and is hard wired for internet and cable service installation.

Turnstone Development chief operating officer Sue Wiemer said that while under construction, the complex drew an overwhelming response from prospective residents. "There was a clear need for it in that location," Wiemer said. "We had over 250 applicants on the waiting list. There was such a huge demand." Wiemer said the wait list is growing and will be utilized when phase two of Wisdom Village of Northlake is completed.

City of Northlake Mayor Jeffrey Sherwin was among the project's strongest advocates. "We have seniors in Northlakewho have lived here for forty and even fifty years, but can no longer afford the cost of their home," Sherwin said. "Some seniors have to get by on only their monthly social security check. They need affordable housing options that allow them to stay with the same church, friends and senior groups."

The property was previously zoned commercial but was re-zoned to make way for senior housing. Three buildings were razed onsite prior to groundbreaking for Wisdom Village.

Mayor Sherwin said the planning of the project led to the creation of a new zoning classification for senior housing, which reduced the number of parking spaces mandated by the city. The relaxed parking regulations allowed the development to fit within site. Sherwin said without this change the development could not have gone forward.

Wiemer said it was that kind of advocacy from the city's leadership that made Wisdom Village successful. "What sets this project apart is that the Mayor was fantastic about being involved every step of the way," Wiemer said. "He went to bat for this and advocated to IHDA for the tax credits, and to the Housing Authority of Cook County for rent subsidies. He helped market the property and was instrumental in getting the word out."

There were approximately 60 applicants that year for housing tax credits through IHDA. Only a handful is awarded the credits, which benefit residents in the form of lower rents.