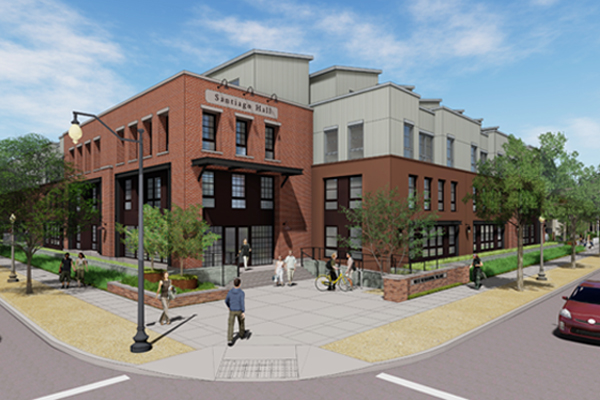 IRVINE, CA - International award-winning firm KTGY Architecture + Planning is pleased to announce that after four years of careful planning and collaboration, Chapman University’s latest development project has been approved by the City of Orange, California. The project includes a new 402-bed student apartment building for upperclassmen alongside the adaptive reuse of one of the most valuable historic resources in Old Towne Orange, the Villa Park Orchards Association Packing House. Originally built for the Santiago Orange Growers Association in 1918, this packing house became the world’s largest exclusive shipper of oranges and shaped the development of this area of Old Towne. The City of Orange Old Towne Historic District is the largest National Register District in California. Adaptive reuse of the Packing House allows for the conversion of the historic packing room into a museum, student services center, or classrooms/offices for the University.

According to Ken Ryan, KTGY principal and head of the firm’s Community Planning and Urban Design Studio KTGY’s role was to ensure project consistency with KTGY prepared Specific Plan Design Guidelines, coordinate with the various design firms, provide design recommendations and shepherd the project through a complex approval process. Since 2001, Ryan and his studio have represented the University as Design Advisors and Project Representatives for nearly 40 projects. “We have worked closely with project-specific architects and other consultant team members in preparing and processing the required City submittals for a wide variety of projects. We’ve also had the honor of working with the University’s President, Administration and Board of Directors as well as various Department Heads over the years,” said Ryan. “In addition, our team prepared and successfully processed the campus-wide Specific Plan and EIR for Chapman University through the City of Orange.”

Adaptive reuse of the Packing House required extensive evaluation of the structure and collaboration with architecture firm AC Martin and Historic Resources Group’s Peyton Hall, one of the country’s premier historic preservation architects. “The front portion of the main packing room allows for classrooms, offices and the possible relocation of Chapman University’s Hilbert Museum of California Art, which is currently located near Ruby’s and the train station in Old Towne Orange,” said Ryan.

The Hilbert Museum is home to a collection of paintings from the “California Scene” movement of the 1920s through the 1970s and beyond, including paintings by Millard Sheets, a relative of Ryan’s, noted Johanna Crooker, Ryan’s Studio Director overseeing the project.

“The rear portion of the packing room is also reserved for University uses and includes the excavation of a large courtyard that will expose the basement level of the Packing Room to the sunken courtyard area. This large courtyard provides an outdoor common area for residents of the new student apartment community adjacent to the Packing House,” said Crooker.

The exterior of the building will be restored to its appearance during the period of significance by removing some later additions, restoring the original paint colors, and installing building signage that replicates the original Sunkist sign. An old Railroad Spur alignment has been brought back to life and utilized to tie the site together with materials and interpretive signage telling the rich history of the property. Landscape and hardscape designs in front of the Packing House were carefully crafted by Bennitt Design Group. Interpretive signage was designed by Hunt Design and Ruzika Design provided lighting design to showcase the Packing House.

The new student apartment building was designed by architecture firm Togawa Smith Martin. The new residential building, which is being built next to the packing house, is designed to reflect the industrial character of the packing house and surrounding neighborhood. “The new student housing building provides much-needed student housing for the University,” said Ryan. “In designing the new building, it was important to balance the demand for student housing with preserving the historic character of the site. The new building needed to be large enough to accommodate the number of beds without overwhelming the adjacent Packing House.”

Key to this successful approval was working with the City’s historic resource advocates, City staff and the City of Orange’s excellent Design Review Committee, Ryan said. “The City is fortunate to have such capable individuals donating so much of their time and expertise to projects within the Historic District,” said Ryan. “We listened, identified shared goals and made changes that I believe made the project even better. It’s a win-win relationship.”