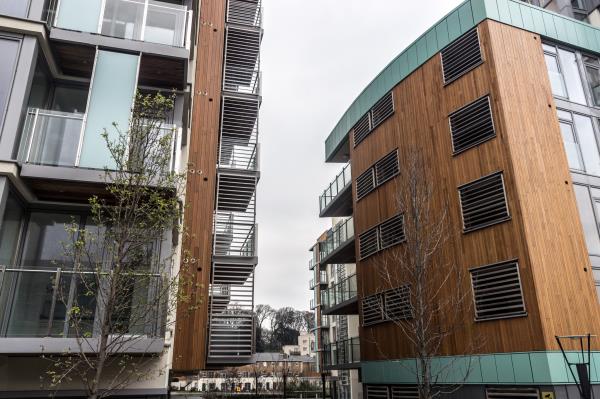 BEVERLY HILLS, CA - Global real estate investment company Kennedy Wilson announced that the company and its equity partner have refinanced the existing construction loan on Phase II of Clancy Quay. When complete, Clancy Quay will include 845 units within a high-end multifamily community on the southern banks of the River Liffey in Dublin, Ireland at the historic site of Clancy Barracks. The loan was secured following full delivery of Phase II.

The new €45 million loan carries a fixed-rate of 2.03% maturing in 2025, generating €7 million in cash proceeds. Construction of Phase II of Clancy Quay was completed in summer 2017 and it is expected to be stabilized by Q1 2018.

“We are pleased to obtain favorable fixed-rate financing following the completion and active lease up of Phase II at Clancy Quay,” said Mary Ricks, President and CEO of Kennedy Wilson Europe. “With over 230 basis points in cost savings, the new loan will enable us to maximize property cash flow as we work to complete the largest apartment community in Ireland. Kennedy Wilson’s multifamily portfolio now includes 2,000 units in Ireland and we remain committed to investing and growing that portfolio for the long-term.”

Kennedy Wilson has secured planning approval for the project’s 2.8-acre Phase III that will consist of a total 259 new units expected to be complete in 2020. Thirteen of the units in Phase III are currently under construction and will be available in Q1 2018. Once all phases are complete in 2020, Clancy Quay will be the largest apartment community in Ireland with 845 total units.

Residents of Clancy Quay have exclusive access to luxurious amenities, including a state-of-the-art gym, cinema room, game room and chef-style kitchen for events. Clancy Quay is located near Phoenix Park as well as several transportation links including LUAS light rail access at the nearby Heuston Station and Dublin bus routes.