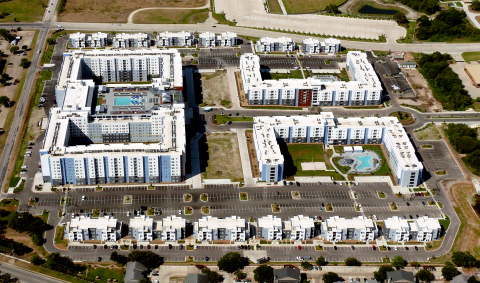 COLLEGE STATION, TX - Nearly two years to the date of opening construction, The Weitz Company finished building the largest student housing development in the United States one week ahead of schedule.

Located in College Station, Texas, on the campus of Texas A&M University, Park West is a 50-acre, 3,406-bed, 2.2-million-square-foot community that was organized through a public-private partnership between the Texas A&M University System; Irving, Texas-based developer Servitas; and Weitz.

Construction started August 1, 2015. In less than two years, Park West was turned over to Servitas at the end of July to operate and manage under a 30-year agreement with the Texas A&M University System.

“Most projects of this size have a much longer duration. To finish in two years, we engaged our in-house experts and subcontractor partners early in the design-build process and also implemented Lean construction practices, keeping all parties fully committed throughout the build process,” said The Weitz Company Vice President Shane Bauer.

At its peak, there were upwards of 1,000 construction workers on-site every day at Park West. Coordinating schedules and maintaining a predictable workflow for the 58 subcontractors Weitz directly supervised (and approximately another 50 that were indirectly overseen) was driven by Lean and the Last Planner® system. Selecting the major trades early; involving them in the fast-track design-build strategy; pulling information to identify and plan critical paths; and holding firm to Weekly Work Plan and 6-Week Look-Ahead meetings kept everything progressing in unison.

In addition to utilizing Lean disciplines, the project team leveraged Building Information Modeling (BIM) to identify constraints and clashes with structural, mechanical, electrical and plumbing subcontractors prior to work being performed. Technology such as Bluebeam and virtual reality (more than four million square feet of Park West was replicated in a virtual environment) were instrumental in enabling quick, timely decisions.

This supreme level of collaboration and communication gave confidence to all stakeholders involved, including those from the Texas A&M University System and Servitas who weren’t witnessing all the day-to-day activity but were extremely invested in the project’s quality and schedule.

“Park West is a milestone project both for us and for the Texas A&M University System, which will see benefits from this incredible development for many years to come. We are exceptionally proud of this project and thankful for Weitz’s part in delivering such a beautiful development,” said Servitas CEO Rafael Figueroa.

The systematic approach Weitz applied to the build process was also evident to Texas A&M University System Vice Chancellor of Business Affairs Phillip Ray, who has helped engage the A&M System in more than 20 P3 projects across Texas under the leadership of Chancellor John Sharp.

“The construction professionals at Weitz have been top-notch, and they delivered a high-quality product that will serve Aggies for decades,” Ray said. “This public-private partnership has led to the best student housing development in the country – maybe the world – to be constructed without the university taking on any debt as well as allowing the System to strengthen our core mission of teaching, research and service.”

Orchestrating every aspect of construction was a group of project leads (managers, superintendents and engineers) who possessed more than 125 years of experience combined. They were paired to perfection with a young, eager project team of Millennials that had the necessary attributes to maintain accountability and deliver on the commitments made within the P3.

In the truest form of the Last Planner system, it all started before the first piece of equipment arrived on the jobsite when work was divided into manageable pieces and matched to the staff’s talents to optimize productivity and success.

“Finishing ahead of schedule is a direct reflection to how well our team performed as a unit with subs, Texas A&M, Servitas and others that had a role in this project,” said The Weitz Company Senior Project Manager Frank Dascanio. “Park West will be remembered for a long time, and every employee we had working on it will carry its success with them throughout their careers.”