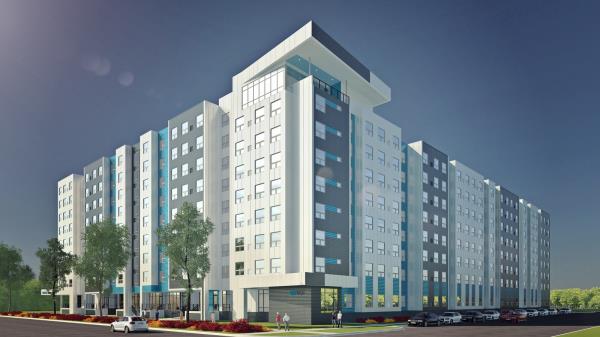 "We anticipate with its location pedestrian to both the MSU campus and downtown Lansing, SkyVue will become a popular center that will bridge both communities," said Randy Churchey, EdR's CEO.

The 824-bed wrap-style, mixed-use community, built in a joint venture with RISE: A Real Estate Company, offers floor plans in one-, two- and four-bedroom configurations with more than 4,000 square feet of retail space.

"The grand opening of SkyVue serves not only as a milestone for our companies and our partnership, but more importantly as the mark of a mission accomplished in positively impacting the Lansing community," said Ryan Holmes, CEO of RISE: A Real Estate Company.

EdR owns 90 percent of the development and is responsible for leasing and management of the community. Apartments feature private bedrooms and baths, washers and dryers, furnishings, granite countertops and other upscale appointments. Community amenities include a covered parking garage, computer center, study room, fitness center, and two courtyards with grilling stations, televisions, volleyball court and robust internet and Wi-Fi throughout the building.

Michigan State University has an enrollment of more than 50,000 students, offers degree programs in more than 200 academic pursuits and ranks 45th among the nation's public universities, according to U.S. News & World Report.