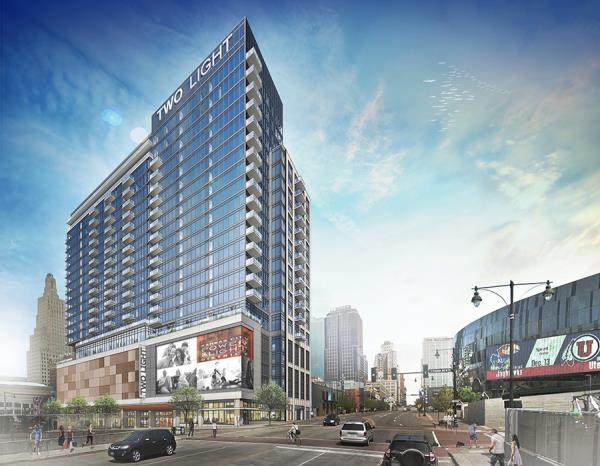 KANSAS CITY, MO - As it nears its 2018 completion, Two Light Luxury Apartments in the Kansas City Power & Light District celebrated the pouring of the building's last column with a ceremonial Topping Out event held at the project site. Executives from The Cordish Companies and the Power & Light District were joined by distinguished guests from the City, community and business leaders, executives and team members from JE Dunn Construction Company and lead project architect Hord Coplan Macht, to celebrate this exciting milestone, continuing a boom in residential growth downtown that shows no signs of slowing.

Two Light will be the second of four high-rise apartment buildings built by The Cordish Companies within the perimeter of the Power & Light District, with the 25-story One Light Luxury Apartments having opened in November 2015.

Scheduled to open in 2018, the 296-unit Two Light will join One Light as the second new construction high-rise apartment building in the last 50 years in downtown Kansas City, MO

"The topping out of Two Light is an exciting milestone and a great opportunity for us to share our appreciation of the hard and skillful work the JE Dunn team has done so far," said Nick Benjamin, Executive Director of the Kansas City Power & Light District and Director of Multifamily Development for The Cordish Companies. "Just like its sister property, One Light, Two Light will add a unique, amenity-rich residential experience to Kansas City's downtown, which is now growing at pace with the country's most dynamic cities. We are extremely proud of what we delivered with One Light and with today's milestone, we are one step closer to Two Light achieving the same success.  We can't wait to reveal Two Light to Kansas City next year."

Scheduled to open in 2018, the $120 million, 296-unit Two Light will join One Light as the second new construction high-rise apartment building in the last 50 years in downtown Kansas City.

The 24-story tower features a seven-story parking garage with 499 spaces, plus 18 floors of studio apartments, 1-bedroom, 2-bedroom and penthouse apartment homes. Additionally, the first floor will include 15,000 square feet of office space and 3,100 square feet of retail space.

Two Light will feature more than 16,000 square feet of amenity space that rivals that of any luxury apartment or condo building anywhere in the United States.