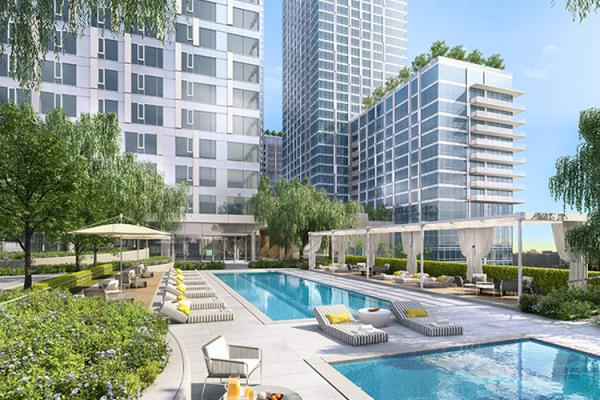 LOS ANGELES, CA - Metropolis Los Angeles, one of the most anticipated mixed-use developments in Downtown Los Angeles, opened its doors to guests and current residents for an exclusive grand opening event on July 13.

Developer Greenland USA has invested more than $1 billion to create a new landmark for Downtown Los Angeles. Located at 889 Francisco Street on the largest undeveloped property in the Central Business District, Metropolis, at 6.33 acres and with 3.5 million sq. ft., will be one of the largest mixed-use developments in the western U.S. Residents of the first residential tower began move-ins beginning in April 2017, and strong sales numbers for the tower indicate growing interest among prospective buyers.

Along with the 18-story, 350-room Hotel Indigo, which opened in April 2017, the project's first of three residential towers rises 38 floors and 308 units – a breadth of studio, one, two, and three-bedroom condominiums – with luxury interiors, amenities and concierge services, onsite fine dining, retail, and expansive views of the city, mountains and coastline. The second and third residential towers, at 40 and 56 floors, respectively, are currently under construction. The mixed-use development is slated for completion in 2019.

For the first time, Metropolis connects the financial district to the north and the sports and entertainment district to the south with a pedestrian-friendly thoroughfare replete with shops, restaurants and bars. Designed with four distinct cascading high-rise towers – three residential towers and one boutique hotel tower – Metropolis redefines the L.A. skyline and streetscape, while setting a new standard in upscale, downtown living.

The rooftops of Metropolis are uniquely shaped to distinguish the buildings from the older skyscrapers located behind. From the west, along the 110 freeway, the façades sparkle and shimmer in different metallic colors under the sun. In contrast, the north and east façades present a simpler, flatter face, enabling residents and visitors to focus their views on the surrounding areas. When the project is completed in 2019, most Metropolis residences will have a view of the amenity gardens, which is at the center of the project and provides a communal heart for the residents.

With stunning architecture paired with equally engaging art, CONVERGENCELA is an onsite installation at Metropolis created by local Los Angeles artists Refik Anadol and Susan Narduli. A fluid piece that uses historic and real-time data to digitally depict the diversity, culture and creativity of Los Angeles, CONVERGENCELA paints digital strokes on a 100-foot-wide LED canvas by seamlessly capturing and combining real-time demographic, astronomical, oceanographic, tectonic and climate data, as well as social media posts, traffic and news feeds, all of which are specific to Los Angeles.

"From its groundbreaking 40 months ago up through today, it has been steady progress in the development of one of Downtown L.A.'s most exciting properties," said Gang Hu, president and CEO of Greenland USA. "I'm grateful for the collaboration of our partners, including Gensler, JG Neukomm Architecture and Douglas Elliman Development Marketing, and we look forward to celebrating the culmination of a shared vision with our first homeowners and guests."