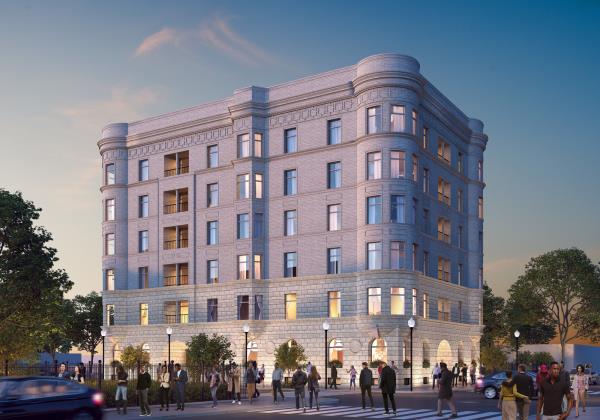 DETROIT, MI - Olympia Development of Michigan announced plans for hundreds of new affordable and market-rate rental housing units across six buildings in The District Detroit's initial phase of residential developments. Four existing buildings – The Alhambra, The American, The Eddystone and 150 Bagley – and two new-construction buildings will create an exciting mix of urban lofts and apartments in The District Detroit.

This initial phase of residential development includes 686 units, 139 of which will be designated as affordable at no more than 80 percent of the Area Median Income (AMI). These projects together meet Olympia Development's goal of 20 percent affordable housing throughout The District Detroit.

"Olympia Development's plan to preserve several historic buildings and bring hundreds of new residential units into the heart of the city is a clear sign of the demand for housing in Detroit," said Detroit Mayor Mike Duggan. "The fact that they are including nearly 140 units of new affordable housing across these six developments aligns perfectly with our efforts to build a city that includes everyone."

"The District Detroit will be one of the most exciting places in the country to live," said Christopher Ilitch, president and CEO of Ilitch Holdings, Inc. "These six uniquely Detroit residential developments will be in the heart of the action, in a city on the rise."

The District Detroit, a 50-block, mixed-use development led by the Ilitch organization, is a world-class sports and entertainment destination built around eight theaters, all four major sports teams, three professional sports venues and new restaurants, shops, offices and places to live – connecting Downtown to Midtown Detroit into one vibrant area.

"I am very optimistic about the opportunity for a dynamic development at 150 Bagley," said Emmett Moten, Jr., Team Executive for Bagley Development Group and a veteran Detroit developer. "This well-known building has a high-demand location, and we believe its renovation will be well received by the entire community."

"We're excited to be part of such a transformational development in our hometown," said Jerry Krueger, president of American Community Developers, Inc. "We're proud to play a role in the renovation of three historic buildings as well as the development of new landmark properties in The District Detroit."