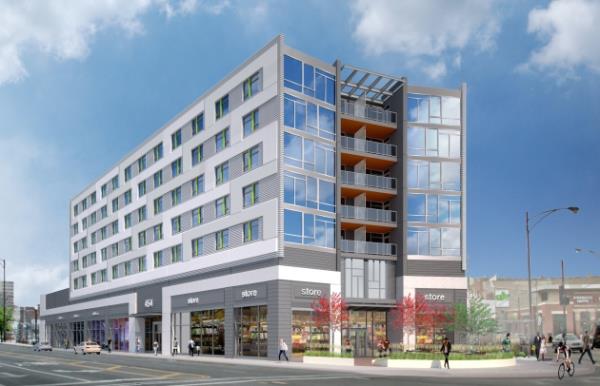 CHICAGO, IL - Alderman Walter Burnett headlined a ceremony celebrating the grand opening of Clybourn 1200, a new mixed-income, mixed-use apartment community located in the heart of the Cabrini-Green revitalization area on the city’s north side. The ribbon-cutting for the new 84-unit apartment community that will serve families of all income levels was hosted by the development team of Brinshore-Michaels.

“Clybourn 1200 represents a perfect example of effective community engagement and collaboration,” said Richard Sciortino, a founding principal of Brinshore Development, LLC. “Our partnership with the Cabrini Local Advisory Council as well as program initiatives with City Farms, Near North Unity Program, Chicago Bee Co-Op and others resulted in a rich and diverse development.” The seven-story high-rise will include 26 public housing units on the nearly one-acre site and features modern, dramatic architecture; green and sustainable features and impressive energy efficiency for residents in a mix of studios, one-, two-, and three-bedroom apartment homes.

“This is yet another example of the progress CHA is making with its development partners as we head toward the completion of the Plan for Transformation,” CHA CEO Eugene Jones, Jr. said. “With the delivery of these units, we are again showing the unmistakable momentum that has been created here at CHA in producing housing and retail options and other amenities people want and need in Chicago neighborhoods.”

"We are excited about the new development at Clybourn 1200; this development brings so many positive components to the neighborhood, including a day care center, which is a great convenience for new residents who have children. Additionally, this development will help formerly displaced residents wishing to relocate back to community," said Alderman Burnett.

There is a working apiary on the building’s rooftop, which is home to multiple honeybee hives being cared for by the Chicago Honey Co-op. On the ground level, 16,000 square feet of commercial space will be occupied by local businesses, including the Happy Trails Day Care Center. On the second floor, residents will be able to enjoy a beautifully landscaped deck with outdoor seating and a fireplace.

A community garden, located on the third floor, is being offered in partnership with City Farm.

The community will serve households with a variety of income levels, including market-rate tenants, public housing residents, and families with incomes below 80 percent of the Area’s Median Income (AMI). In a neighborhood where rents have been trending upward, Clybourn 1200 represents an important new affordable housing resource. Located across the street from the former site of the Cabrini-Green public housing complex, Clybourn 1200 is near shopping, employment opportunities, and public transportation.

“In addition to achieving the city’s mixed-income housing goals for a prominent location, the new building has a thoughtful and functional design that complements nearby retail and residential uses and the ongoing Near North Redevelopment Initiative,” said DPD Commissioner David Reifman.

Financing for the project included $13.1 million in private equity generated from the sale of 9% federal Low Income Housing Tax Credits and $1.9 million in private equity raised from sale of Chicago Donation Tax Credits, generated from the city of Chicago's donation of the land. Public financing includes an $8.1 million CHA loan, along with $8.1 million in Tax Increment Financing assistance. Additional private financing includes a $7.8 million Citibank loan.

The development team included Brinshore-Michaels, a partnership of Brinshore Development, and The Michaels Development Company, which together has collaborated on nearly 1,700 units of affordable housing in Chicago. The development team also included the non-profit organization Cabrini-Green LAC Community Development Corporation, which also has an ownership stake in the property. McShane Construction served as the general contractor. The community is being managed by Interstate Realty Management, which will ensure that it remains a long-term asset to the neighborhood. The Near North Unity Program has partnered with IRM to promote community integration.