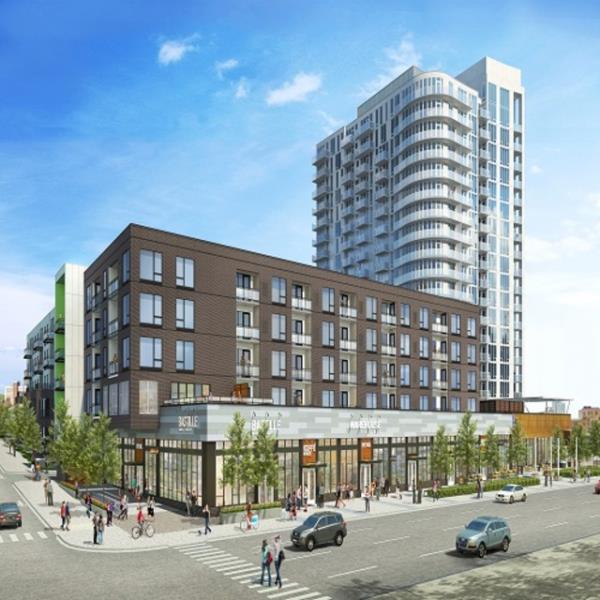 MINNEAPOLIS, MN - LMC, a leader in apartment development and operations, announced the topping off of NordHaus, a luxury mixed-use apartment community located in the charismatic northeastern portion of the city.

The 20-story community features 280 apartment homes, including 12 penthouses, and 22,000 square feet of ground-floor retail and destination restaurant space. Now that the development has reached its highest point of construction, the LMC team is focusing on completing the building exteriors and preparing apartment interiors for first move-ins, anticipated for August.

"The process with this development was very unique, and we believe the backstory of the site will give NordHaus plenty of character," said Jon Fletcher, senior development manager for LMC. "After working closely with the city, county and state to prepare the land for development, we're ecstatic to have reached this development milestone and to begin building our initial resident base. We believe NordHaus will offer an unmatched living experience in the area."

Located at 315 1st Ave. Northeast, the site has a storied history. In 1955, Superior Plating relocated to the site for a variety of plating uses, eventually closing in 2012. The plating factory, which manufactured parts for commercial, aerospace and military use, was demolished in the spring of 2014. The site was initially developed in 1891 as a car barn used by the Minneapolis Rapid Transit Street Railyard Company and used to repair streetcars.

The community's Scandinavian-inspired design, which mixes a European style with North Woods character, will complement modern-day Northeast Minneapolis, which is defined by its creative, artistic residents and businesses. Located across the Mississippi River from downtown Minneapolis, the locale often is referred to as "Nordeast" to pay tribute to the area's northern and eastern European immigrants.

The neighborhood features an eclectic mix of locally owned establishments within walking distance, including several craft beer pubs, the Yoga Sol studio, Gorkha Palace, the Red Stag Supperclub and The Herbivorous Butcher vegan restaurant. Residents also will be able to walk to the abundant green space and paths along the Mississippi River. The site also is situated less than two miles from Interstate 35W, which provides connectivity to the major employment centers throughout the metropolitan area.