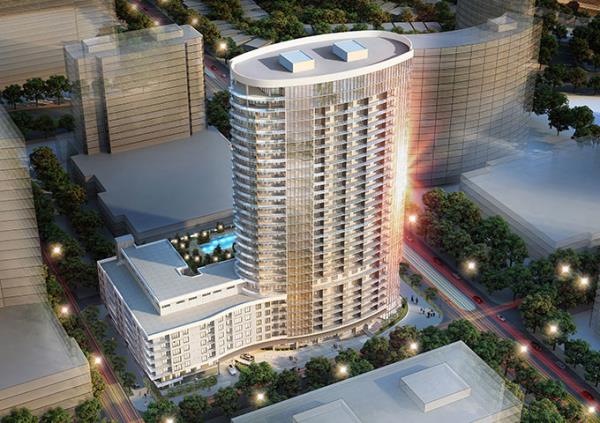 PLANO, TX - NE Development, an upscale suburban apartment, retail, and mixed-use developer, has announced that the official groundbreaking of the newly branded apartment building, LVL 29, will be held on Thursday, April 27, 2017. The building, named for the property’s 29 levels and the residents’ aspirations to achieve their highest potential, will be located in Legacy West, a 250-acre prime mixed-use destination situated at the North Dallas Tollway and State Highway 121 in Plano.

Appealing to the professionals in the area, LVL 29 will be an ellipses-shaped building featuring luxury apartment homes that range from 600-square-foot units to 3,800-square-foot penthouses with private garages. The property will also feature a seven-story parking garage, 24-hour fitness center and fitness-on-demand yoga room, grand cabana with firepit, exclusive pool and tanning deck, and a bar and lounge veranda. Taking into account the unique architecture and interior design, the building will boast upscale furniture, high-end finishes, designer chandeliers, greenbelt views, 24-hour concierge services, and sleek exterior lighting in customizable colors.

“LVL 29 will become a landmark in the area as the premier high-rise apartment building in Plano. It will transform the city’s skyline and stand out among a group of square buildings,” said Luke Harry, Project Manager, NE Development. “Legacy West is ideal for LVL 29. Step outside of the main lobby and you’re surrounded by thousands of jobs within walking distance, and billions of payroll dollars. This development checks every box from a financial standpoint. From a lifestyle view, you can’t beat the building’s aesthetics and access to retail, dining, and cultural amenities.”

Criterion.B serves as the branding agency for LVL 29 and Henderson Design Studio is the interior designer. Construction on LVL 29 is expected to be completed in May 2019 and lease-up will begin in December 2018.