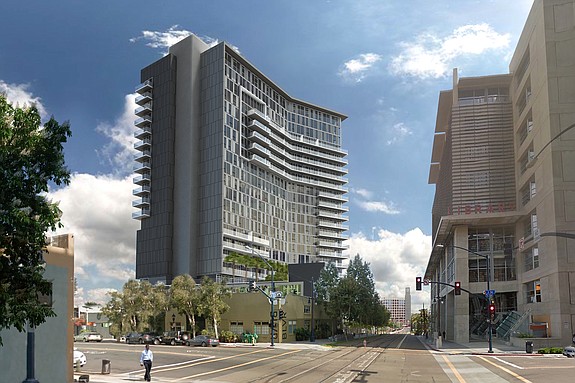 SAN DIEGO, CA - The Richman Group of California Development Company has broken ground on K1, a mixed-use development that includes a 23-story luxury residential tower with 222 apartments, more than 7,000 square feet of ground floor commercial space and parking for 317 vehicles. K1 also features an adjoining low-rise building, playfully called The Sliver, which will include two penthouses, a restaurant and urban garden. Completion of the project, which is located directly across from the Downtown Central Library, is scheduled for early 2020. Development costs for the 422,793-square-foot project, exceed $100 million.

K1 occupies most of the block bounded by Park, 13th, J and K streets in Downtown’s East Village neighborhood. It is less than three blocks from Petco Park.

Architectural highlights include a two-story “Sky Lounge” on the 19th floor, a resort-style pool area with spa and fire pits on the fifth-floor podium level and adjoining two-level recreation center with lounge, demonstration kitchen and gym.

“The site’s spectacular location – across the street from the Central Library and along the Bay-to-Park Link that joins San Diego Bay with Balboa Park – deserves an iconic project that complements the library and encourages public engagement,” said Luke Daniels, president of The Richman Group of California, part of the The Richman Group, the nation’s seventh largest apartment owner.

“K1 will be a Richman Signature Property, which combines first-class service, extensive amenities, and high-style architecture with a 30-day ‘Love It’ guarantee, 24/7 warranty response and individual design services,” said Daniels.

Quigley, whose Central Library design became an instant San Diego icon, designed the project’s secondary structure, ‘The Sliver,’ as an idiosyncratic, playful building to animate and give life to the tower. It features an energetic restaurant space that includes generous outdoor seating and two architecturally striking mid-rise penthouses.

The tower is designed to include 58 studios, 87 one-bedroom units and 77 two-bedroom units, and six levels of secure parking.

Landscape architects Spurlock Poirier has surrounded the project with inviting gardens and a wide promenade along Park Boulevard. The ground-level commercial space is planned to open onto a new public park, diagonally connecting K Street with upper 13th Street.

“We were fortunate to have assembled such an illustrious design team,” said Preston Underdown, director of development for The Richman Group of California. “The tower blends beautifully with library next door and gives it breathing room. Rob Quigley provided invaluable insight to the project and added some unique architectural elements that will become the soul of K1 and a valuable community attraction,” he added.

K1 is The Richman Group’s second major Downtown San Diego residential project to break ground in the past year. Last May, The Richman Group broke ground on another Richman Signature Property, F11, a seven-story luxury apartment/retail mixed-use development, located on the north side of F Street between 11th Avenue and Park Boulevard. F11 with 99 units is scheduled to open in mid 2018.

The four-year-old Richman Group of California is also nearing completion on Sage, a five-story apartment community in Cerritos with 132 market-rate apartments and deluxe recreational amenities. Leasing for the first phase of apartments at Sage is scheduled to start this summer.

Since its inception in 2014, The Richman Group of California has completed or started construction on 550 units and expects to have more than 750 units in production by yearend, including two new projects in Ventura County and Contra Costa County.