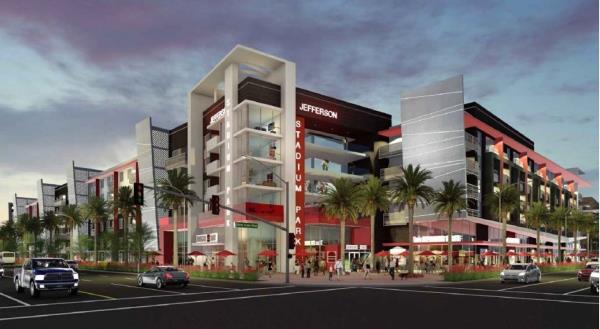 ANAHEIM, CA - JPI, a leader in the development of Class A multifamily housing, announced the close of construction financing for Jefferson Stadium Park's Phase I, consisting of 371 luxury apartment homes and a 1.1-acre public park.  The community is located on a 17.6-acre prime real estate site located in the prestigious Platinum Triangle in Anaheim, California – directly adjacent to Angel Stadium of Anaheim.

Jefferson Stadium Park, a three-phase development, will ultimately result in the construction of 1,079 luxury apartment homes including 12 live-work units, the 1.1-acre park, and 14,600 square feet of community-oriented retail space.

"Clearly, JPI is committed to investing in the vision of Anaheim's Platinum Triangle.  We currently have four projects in various stages of development within the Platinum Triangle, with a total anticipated value upon completion of over $675 million," said Todd Bowden, JPI's Western Region Senior Vice President and Managing Development Partner. "Platinum Triangle is a model for development efforts that encourage new projects and enhance quality living experiences for the community. Stadium Park only strengthens that commitment."

The Jefferson Stadium Park constructing financing is provided by East West Bancorp, a publicly owned company with assets over $34 billion. East West Bank is a premier bank focused exclusively on the United States and Greater China markets, and operates over 130 locations worldwide.

In June 2016, JPI received unanimous approval for the project from Anaheim's Mayor and City Council, and in September 2016, it was announced that JPI had partnered with Grand China Fund, a Beijing-based private equity real estate fund, in a $255 million Joint Venture to develop Phases I and II of Jefferson Stadium Park. Laurie Mathers, the U.S. based Head of Acquisitions for Grand China Fund, said at the time: "Our fund seeks to partner with leading real estate developers in gateway cities across the U.S.  Jefferson Stadium Park is a model for this type of development, and represents Grand China Fund's commitment to identifying quality investments for our partners."

Gus Villalba, Managing Regional Partner of JPI's Western Division, said: "The closing of our construction financing for this project with East West Bank, coupled with the investments from our Chinese partners, solidifies that Jefferson Stadium Park will come to life as a model project for our portfolio, and for future investments in other projects by Chinese investors."

"Jefferson Stadium Park represents the ideals that we originally envisioned for Anaheim's Platinum Triangle," said Anaheim Mayor Tom Tait. "This area will be transformed with the dynamic new community this project will create."