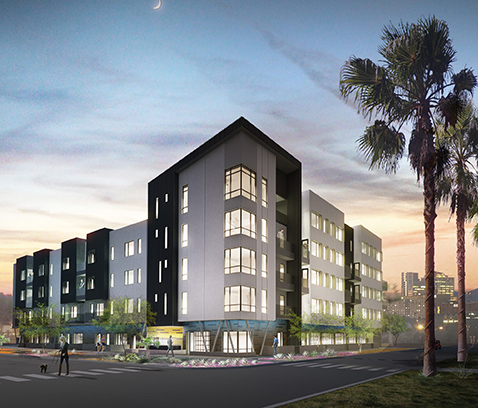 PHOENIX, AZ - Shepley Bulfinch, a national architecture firm known for design excellence and innovation with offices in Boston, Houston and Phoenix, announced the grand opening for phase one of en Hance Park, a distinctive condominium development in downtown Phoenix.

As one of the first new developments in this re-emerging downtown district, en Hance Park will serve as an anchor for future growth. Shepley Bulfinch is working closely with developer Sencorp on this transformational urban development project which, when complete, will cover almost an entire city block.

The new en Hance Park is open, airy and contemporary with clean lines and modern amenities. As an intentional contrast to more elaborate facades nearby, there is a distinct simplicity to en Hance Park's exterior. The building is clad in metal panels and smooth stucco using a color palette reminiscent of the surrounding desert. This gives the building a sleek appearance that is also warm and inviting, fitting in beautifully with the sprawling park across the street.

"Our goal for en Hance Park was to build smartly-designed residences that expertly combine functionality, creativity and sophistication," said Alvaro Sande, CEO of Sencorp. "Shepley Bulfinch helped us realize our vision through ingenuity and practicality in the design and planning of this project. The firm gave careful thought to every living space and common area and it is this attention to detail that distinguishes en Hance Park as an urban oasis."

With the groundbreaking for phase two scheduled for spring 2017, en Hance Park is one of four residential developments Shepley Bulfinch is currently working on in the metropolitan Phoenix area, creating an additional million square feet of living space within the city.