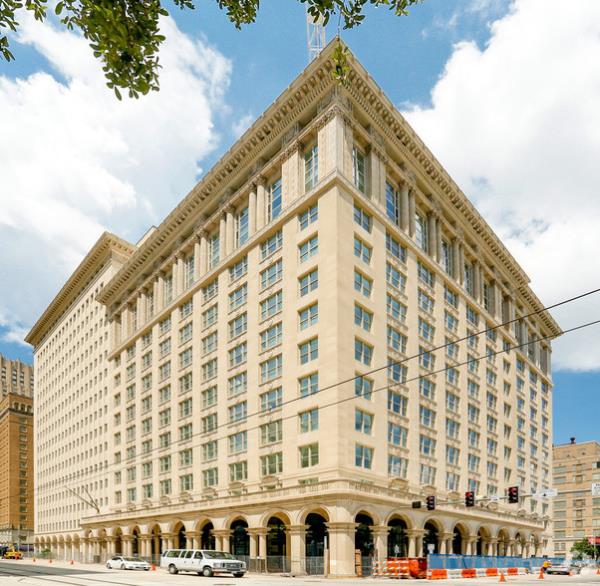 HOUSTON, TX - Just shy of its 102nd year as a downtown landmark, one of Houston's most beloved buildings, the Texaco at 1111 Rusk Street, is welcoming guests again for the first time since 1989 as part of the Downtown Living Initiative. Under the stewardship of Provident Realty Advisors, the early skyscraper that cemented the city's economic significance has been reborn as The Star. The multifamily milestone, managed and leased by Fein, celebrates the refined Renaissance Revival style and striking Beaux-Arts accents implemented by the New York architectural firm of Warren & Wetmore, which completed Manhattan's Grand Central Terminal two years prior.

"There are so few opportunities to create something as magical as The Star," said Provident Realty Advisors' Kip Platt, the Development Partner. "We were fortunate to have found an iconic, pre-war building of this scale where a thoroughly modern makeover meshes so seamlessly with its timeless architecture."

Encompassing 286 units, ranging from 730 to 1,730 square feet with irreplaceable architectural details and interior finishes typically associated with a high end condominium, The Star reactivates a key block in the heart of a neighborhood rejuvenated by the 2017 Big Game. The exhaustive renovation adds to that progress with a refined living option and approximately 21,000 square feet of street front retail – 75% in final contract negotiations – within steps of two light rail lines, as well as new office, dining, entertainment and hotel offerings.

The launch delivers 207 one bedroom, one bath and 79 two bedroom, two bath homes along with chic and inviting ground floor reception areas. Forty percent of the units offer a powder bath, and a significant portion of the one bedroom homes also feature a separate den or study. Unveiled public spaces include a hotel-style lobby lounge and a cozy and complimentary coffee and snack bar with cafe seating. Restored mosaic tile flooring and original decorative brass elevator surrounds are focal points of the lobby, which is staffed 24/7 by a concierge and free valet for leasing visitors, residents and their guests.

With 22 different floorplans, the design of each residence maximizes window placement, views and a myriad of unique attributes. Depending on the apartment location, the historic nature of the building has created a bonus mix of extras such as deep window ledges for seating or display, beamed ceilings over 11 feet in height and unusually large kitchens, living areas and bedrooms. The scale enhances some masters with dressing or flex space and gives guest or roommate accommodations the luxury of footage for a king bed.

Amenities debuting into summer include a resort-style courtyard with heated pool, cabanas, summer kitchen and gas grills; lower lobby level climate-controlled storage and media/theater room; second floor business center and a covered dog run with grooming station; and 16th level recreation area with two-story, atrium-like foyer flowing into a state-of-the-art fitness center and expansive club room with commercial demonstration kitchen and event space, billiards and TV pods. From the foyer, a dramatic staircase will lead residents to the one-of-a-kind rooftop, where a covered lounge with TV and fireplace will open onto multiple, alfresco seating vignettes, framed by lush landscaping and trees and overlooking downtown Houston.