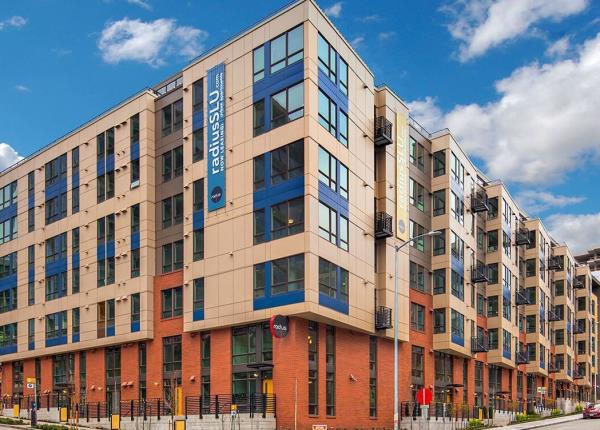 In a 50/50 joint-venture, the company and its partner invested a total of $72 million of equity, of which $58 million was funded from the December 2016 sale of The Grove, a 331-unit apartment community built in 1964 in San Jose, California. The partnership also secured a 10-year fixed-rate loan of $70 million at a rate of 4.06%, interest-only for the first five years.

“Radius is an exciting addition to our Seattle apartment portfolio,” said Shem Streeter, Managing Director of Kennedy Wilson Multifamily Investments. “Seattle’s South Lake Union neighborhood features some of the best rental demographics in the country, including a thriving job market and close proximity to many high growth companies. Our significant presence in the Seattle market allows us to leverage our existing operational expertise all while upgrading the overall quality of our portfolio through these two transactions.”

Radius is located directly across the street from the world headquarters and main campus of Amazon and walking distance to over 10 million square feet of additional Amazon office space. The property is also walking distance to employers such as Facebook, the Fred Hutchinson Cancer Research Center, and a future 607,000 sq. ft. Google campus. Radius is next to many shops and restaurants, and is conveniently located near major freeways, providing quick access to the I-5, SR-99 and downtown Seattle.

The company now has an ownership interest in 10,430 units across 41 communities in the State of Washington.