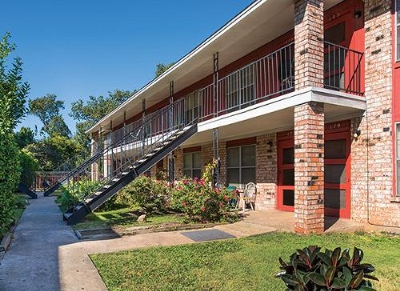 HOUSTON, TX - The NHP Foundation, the national affordable housing not-for-profit, welcomed city and state officials to an event showcasing renovations to-date at Cleme Manor Apartments, the largest multi-family housing community in the historic Greater Fifth Ward neighborhood in Houston. The NHP Foundation received $40.9 million in funding to put toward rehabilitating the 284-unit apartment complex which it acquired in 2014 via a public-private financial partnership with PNC Bank N.A., BBVA Compass, the U.S. Department of Housing and Urban Development (HUD), the National Affordable Housing Trust, the Texas Department of Housing and Community Affairs and the City of Houston.

Originally constructed in 1970, Cleme Manor Apartments sits immediately south of Finnegan Park and the Finnegan Park Community Center. The property features 25 two-story buildings with capacity for approximately 1,400 residents. NHPF is undertaking a massive rehabilitation of the property – which has not seen a comprehensive renovation in over 20 years – including: the installation of new drywall, Energy Star appliances, doors, higher efficiency HVAC units and water heaters, windows, water savings improvements, and more. In addition, construction of a new play area, tot lot, and renovation of the office, community space and laundry facilities are underway.

One of Houston's most improved areas, the Greater Fifth Ward Finnegan Park neighborhood has been earmarked for $35 million in streetscape improvement, multifamily construction, single family rehabilitation and renovation of the Community Center. Cleme Manor Apartments is an integral part of the revitalization of the community. In 2014, the acquisition and planned rehabilitation of Cleme Manor played a major role in keeping officials from closing nearby Henderson Elementary, ensuring neighborhood children could attend a school close to home.

"This project supports my goal of building complete communities where residents can find good jobs, safe and attractive homes, and all of the amenities necessary for a great quality of life," said Houston Mayor Sylvester Turner. "The Greater Fifth Ward is one our most historic neighborhoods.  Restoring health to this traditionally underserved area will have a tremendous impact on the people living there."

"Cleme Manor is a one-of-a-kind opportunity for NHPF," said NHPF's President and CEO Richard Burns. "Because of its scale, unique needs and the impending aesthetic changes and updates to the neighborhood, Cleme Manor has provided NHPF with an unusually robust chance to 'get in on the ground-floor' and play an essential part in the early stages of an exciting neighborhood revitalization. We are excited and grateful to have this opportunity to deliver a sustainably improved living environment for the residents of Cleme Manor Apartments and additional high-quality affordable housing for the city of Houston."