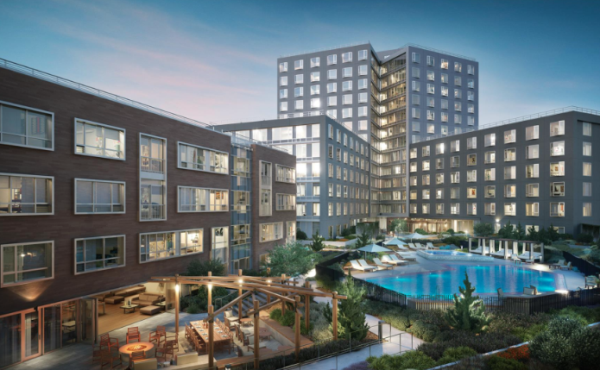 SAN FRANCISCO, CA - CIM Group announced that it has reached a major construction milestone - the topping out the 16-story high-rise building at its 350-unit One Mission Bay residential community located directly across the channel from SOMA at the doorstep of Mission Bay. One Mission Bay is comprised of 198 condominium residences in the high rise building and 152 condominium residences in a six-story mid-rise connected by a beautifully landscaped courtyard.

Set on two acres at 1000 Channel Street between 3rd and 4th Streets, the community features close to 650 feet of frontage along the waterfront, approximately 16,000 square feet of ground level retail, three levels of parking, abundant outdoor spaces, and an array of top-tier amenities for residents.

CIM Group began construction on One Mission Bay in October 2015. The company brings its extensive experience in condominium development to One Mission Bay that includes New York City’s 432 Park Avenue, an internationally recognized luxury high rise condominium that is the tallest residential tower in the western hemisphere.

At One Mission Bay, CIM is creating modern residences offering a desirable lifestyle option surrounded by green space. The project has been developed to maximize access to and views of the waterfront, while taking advantage of the large site to offer expansive private outdoor space for its residents. A range of floor plans provides comfortable and efficient units, from studios to three-bedrooms and a den, with abundant windows to capture the expansive views and natural light.

One Mission Bay is proximate to San Francisco’s popular shopping, dining, entertainment, and business centers. It has an exceptional location adjacent to AT&T Park, approximately eight blocks from the planned Golden State Warriors Sports and Entertainment Center, and is convenient to SoMa, Union Square, and the central business district. It also offers easy access to multiple transit options as it is steps from the Muni Metro Central Subway, which is anticipated to open in 2018, the King Street Caltrain Station, and the area’s regional freeway network.

CIM has been involved in the Greater Bay Area since 2001, when it identified communities located in the area as possessing the attributes that fit its investment strategy that focuses on established and emerging urban areas with solid infrastructure and transportation networks.