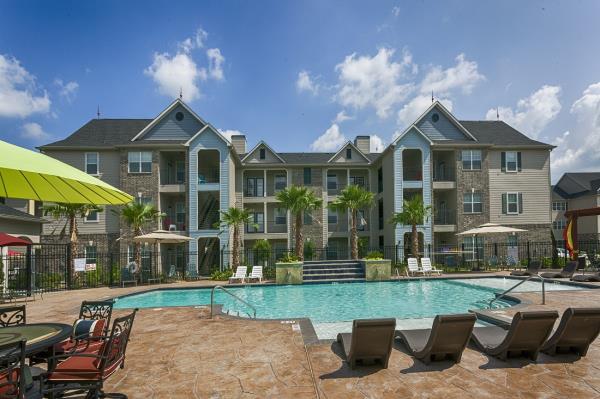 DCM, which recently acquired the iconic First National Bank Tower at 1401 Elm Street in downtown Dallas, purchased Aria at Rollingbrook at 1700 Rollingbrook Drive, Baytown, from The Leyendecker Group of Houston. The price was not disclosed.

“This is more than an acquisition of a year-old Class A stabilized apartment community with an excellent I-10 location and a high 90% occupancy,” explains Noah Drever, senior managing director of Drever Capital. “It is a strategic investment for our fund in one of Houston’s strongest suburban economies that’s driven by the downstream petrochemical sector.”

Drever said Baytown’s Gulf Coast location, between Galveston and the Port of Houston Ship Channel, means that Aria residents working in engineering, industrial construction or maintenance can choose from over 120 petrochemical employers in East Harris County without getting bogged down in long commutes. “Residents can also put down roots and not have to relocate when they complete a project or assignment,” he noted.

Baytown alone is the home of over 20 petrochemical facilities including the nation’s biggest petrochemical plant ExxonMobil Baytown which consists of four separate facilities. “We’re well positioned to attract some of the 4300 employees and personnel maintaining the plant,” said Drever. “Additionally, the Chevron Phillips 66 Chemical plant, with its $6 billion construction campaign, will generate approximately 500 jobs annually during the next six years on top of an existing 9,000 employee base.”

Drever discussed the upcoming renovation program and upgrades designed to enhance the overall community and resident experience. “Our residents are hardworking people who also want a quality lifestyle plus great value and personalized services for their money while our investors want safe and socially responsible returns.”

Drought-tolerant irrigation and landscaping will be added throughout to create a park-like retreat and add recreation space, contends Drever. A commercial-grade outdoor kitchen/bar will be incorporated into the pool area. In response to resident demand, interior upgrades will include granite kitchen countertops, and E-Star appliances and washer/dryer in each unit.

Drever Capital Management, which won the 2016 Information Management Network commercial real estate Social Responsibility Award, is continuing to live up to its motto of “Doing Well by Doing Good” by offering monthly rent discounts to teachers and educators, firefighters and police officers, medical workers, and active and former military personnel. The new owner is also donating an apartment in Aria to a Baytown police officer.

Explains Barbara Moffitt, regional vice president of operations: “Our residents are dedicated middle class working people who go the extra mile for all of us in the community everyday so we create programs to repay them, to give back.”

The acquisition was brokered by Clint Duncan, senior vice president-investment properties of CBRE’s Houston office who represented the seller. Tom Cabibi, director of Acquisitions for Drever Capital, represented the buyer.

“This was a complex deal that was fully marketed nationwide but Noah Drever stepped up to the plate, signed a pre-negotiated ‘as is’ contract and executed on the spot with no delays, without going through batteries of lawyers, and shaving three weeks off the contract negotiating process.” said Duncan. “Noah and his team had done their deep due diligence quickly and thoroughly, they were open to feedback, took direction from us, did exactly what they said they would do and exercised real patience with the seller. Patience was the key to this transaction.”

Duncan also said Baytown’s growth, coupled with an expansion at the Port of Houston and the export of downstream petrochemical products will ensure a demand for top-tier apartment and single family housing for years to come.

Population projections are exceptionally bullish, according to B.J. Simon, associate director of Baytown Economic Development Foundation. Growth ranged from 78,000 in 2010 to 86,000 in 2016 to 90,000 in 2019. Most of the influx are industrial construction workers. “Over the life cycle of the two megaprojects—ExxonMobil and Chevron Phillips, 22,000 people will have worked at those facilities,” he said. “The rule of thumb is that 15% of the workers will be retained, remain in the market, work with other construction contractors along the Gulf Coast and be deployed to other projects in the area.”

The increasing global demand for plastics will be heavily supplied out of Baytown petrochemical plants, notes Professor Bill Gilmer, Ph.D., director of the Institute for Regional Forecasting at the University of Houston’s C.T. Bauer College of Business. “These huge downstream plastics plants will turn out railcar after railcar of plastic pellets that  will be deployed nationwide to every manufacturing plan that turns out plastic parts for, say, cars or toys or anything that uses plastics in a finished product.”

The City of Baytown has been gearing up for the surge in skilled workers, contends Mayor Stephen DonCarlos. “Mobility issues are being addressed with new roads and boulevards that open up new areas to development. Regarding public safety, we’ve added more police officers, firefighters and paramedics to reduce response time.

“The City Council has encouraged quality over quantity in development of both multifamily and single family dwellings,” he added. “Employment opportunity is everywhere and proximity to Houston, with its sports, entertainment, shopping and restaurant scene and distances to Intercontinental and Hobby airports can be measured in minutes.”

Indeed, residents can find almost everything they want in Baytown, added Mayor DonCarlos. The city now has two Walmarts, the redeveloped Baytown Mall, Kroger Marketplace, a new HEB store, the city-owned Pirates Bay Waterpark, while a new little theatre is under construction and Max Bowl is being expanded.

Drever Capital Management and its principals have been impact investors in multifamily and senior housing communities since 1968 and have built or redeveloped 170,000 workforce apartments valued at over $20 billion.