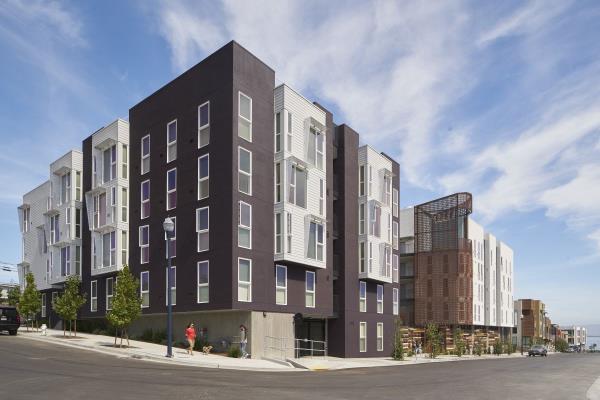 “I am encouraged that the Pacific Pointe project actually serves the residents of the Bayview neighborhood. Many of our neighborhood’s residents live at Pacific Pointe and many have worked on its development,” said Supervisor Malia Cohen. “Not only has the construction of this project provided job and training opportunities for residents but also more permanent affordable housing opportunities for Bayview residents.“

Lennar provided a $10 million construction subsidy and the site infrastructure for the new affordable community. Bank of America is the lender and tax-credit investor for the project.

“I am excited to see the wonderful opportunities that have been available in our community finally come to fruition. One hundred percent affordable housing demonstrates that YCD is serious about keeping our community whole,” said Shamann Walton, Executive Director of Young Community Developers. YCD co-developed Pacific Pointe and will be providing training and social services to residents.

“I am thrilled to see the completion of our first development in San Francisco and very grateful to have had the opportunity to work with the City, Lennar and YCD and many others,” states Percival Vaz, CEO of AMCAL.

The design by David Baker Architects and INTERSTICE Architects is contemporary with exterior architectural elements that vary in size and color to create a distinctive and memorable façade for the structure. The corten steel “sail” pays homage to Hunters Point’s history as a shipping community. Sustainability played an important role in the design and construction of the building. Pacific Pointe achieved GreenPoint Rated status.

Pacific Pointe includes a special community tribute that provides a cultural and historical narrative of the people, places and things that have influenced Hunters Point over the years – spanning from the earliest settlement by the Muwekma Ohlone to the present and future places and institutions of this vibrant community. This public-oriented entry feature was a result of an intensive collaboration with the Hunters Point community as part of the project design process. The idea to tell a story within the project was brought forward early, and was actively supported by several community members, including Pastor Joesiah Bell and Dr. Veronica Hunnicutt.

The master plan for the San Francisco Shipyard and adjacent Candlestick Point includes 12,000 homes, three million square feet of office space, an urban outlet center, local retail, restaurants, a theater and performing arts space. Plans are in place to create 326 acres of parks and open space at the sites.