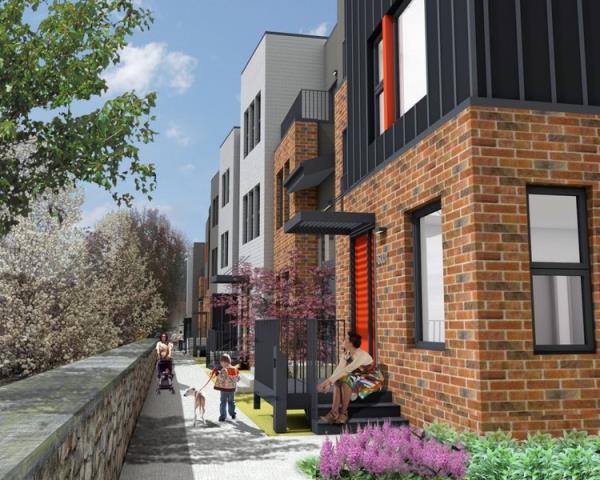 PITTSBURGH, PA - Milhaus Development broke ground on Phase One of an exciting multi-phase residential and retail development in Lawrenceville. Mayor Bill Peduto, Councilwoman Deb Gross, and Matt Galluzzo from the Lawrenceville Corporation were among many who showed up to lend support for Arsenal 201.

"Lawrenceville is a neighborhood full of wonderful people, great businesses, and strong organizations. This project has the potential to build off of all the hard work put in over the years by so many and become an integral addition to the neighborhood," says Councilwoman Gross.

The full development will cover the entire block from 39th to 40th Street, on the original site of Allegheny Arsenal. The site's history played an important role in naming "Arsenal 201". Thomas Bost, the Vice President of Development for Milhaus explains, "From working closely with city officials and the community councils, it was voiced that they would like 'Arsenal' to remain in the name in some capacity. We paired this with '201', the last three digits of the Lawrenceville zip code, to represent the unique, modern, and local Lawrenceville style."

The first phase, eventually totaling over $100M, starts at the corner of 39th and Butler Street. It will have 243 units and 19,000 square feet of retail. Amenities include Arsenal Alley (a pedestrian walkway), Canteen Resident Lounge, Ammunition Fitness/Wellness Center, The Fort (a courtyard complete with hammocks that serves as an outdoor entertainment area) and Cannonball Deck and Pool. Arsenal Alley will connect Butler Street to a new one-acre public park and existing riverfront amenities.

Construction is estimated to be completed in phases with the first units available for prelease in the summer of 2017.

Milhaus is an award-winning, mixed-use development, construction, and property management company that specializes in Class A, urban, multifamily residential buildings. Headquartered in Indianapolis, Milhaus is comprised of inspired and industrious individuals who are passionate about revitalizing urban neighborhoods.