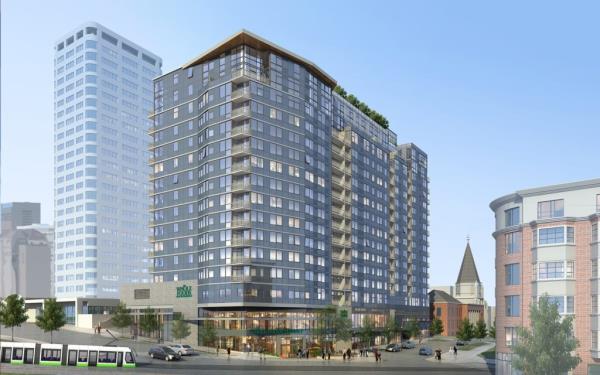 SEATTLE, WA - Columbia Pacific Advisors, an alternative investment firm in Seattle, Washington, has begun construction on The Danforth, a luxury apartment tower that will serve as an anchor of the intersection of two of Seattle’s most prominent streets and two of the city’s most dynamic neighborhoods.

The 16-story, 265-unit tower will rise at the corner of Broadway and East Madison Street, and near the border of the First Hill and Capitol Hill neighborhoods. The tower, at 1001 Broadway, will include First Hill’s first Whole Foods Market, a 40,000 square-foot store occupying the bottom two floors.

The Danforth – including luxury apartments, Whole Foods Market and 355 underground parking spaces – is scheduled to open in mid-2018.

The project was first announced by Columbia Pacific Advisors in November 2014. This month marks a major milestone with the announcement of the start of construction and the name of the project. Tiscareno Associates is the architect, DCI is the structural engineer, GGLO is the interior designer and Howard S. Wright, a Balfour Beatty company, is the general contractor.

“We expect The Danforth to be a destination for residents and workers of not just First Hill and Capitol Hill but also surrounding neighborhoods including downtown Seattle, Madison Park, Madison Valley and the Central District,” said Todd Seneker, Portfolio Manager for Columbia Pacific Advisors’ real estate investment strategy. “The luxury apartments and retail will be centrally located near some of the city’s most historic neighborhoods but also on the First Hill Streetcar line and just blocks away from the new Capitol Hill light rail station.”

“We are excited to share our mission and values with the neighborhoods this store serves,” said Joe Rogoff, Regional President for Whole Foods Market in the Pacific Northwest. “Creating jobs, supporting local producers and finding opportunities to partner with community organizations and non-profits are core to our philosophy and practices. We look forward to serving this intersection of the First Hill and Capitol Hill neighborhoods by providing a wide selection of natural and organic food, sustainable seafood, humanely raised meats and house made prepared foods and bakery items.”

Whole Foods Market has nine store locations in Washington State. In addition to the First Hill location, the company has stores in development in Kirkland and West Seattle.

The Danforth is one of two towers that Columbia Pacific Advisors intends to have built in the First Hill neighborhood. Earlier this year an announcement was released of a planned new ground-up 243-unit, 24-story senior housing community on land owned by the Archdiocese of Seattle.

Columbia Pacific Advisors has a broad real estate portfolio that spans multiple property types and geographic regions. In less than ten years, the firm has built an acquisition and development pipeline that consists of over 3,300 senior housing units, over 1,200 multi-family units and more than 1.2 million square feet of commercial space around the U.S. These projects include the recent sale of a 91,000-square-foot office building in San Francisco and the sale last fall of a 161-unit multi-family property in Seattle.