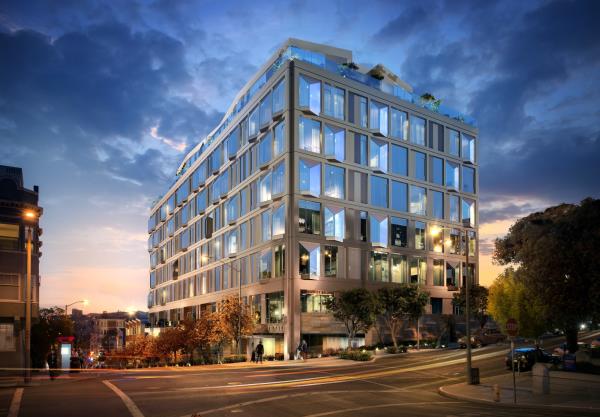 SAN FRANCISCO, CA - Trumark Urban has officially released the first phase selection of 66 gleaming tower residences within The Pacific, San Francisco's most anticipated new condo development in the heart of the Pacific Heights neighborhood. Meticulously designed by Handel Architects, The Pacific represents the pinnacle of cosmopolitan living in one of San Francisco's most sought after enclaves where the median home price rests at just over $1M.

"We are thrilled to officially introduce The Pacific tower residences to the public, and to be one step closer to delivering an incredibly bespoke residential offering that has yet to be seen in this neighborhood," said Trumark Urban Managing Director Arden Hearing. "We've drawn our inspiration from five-star and boutique hotels from around the world and worked closely with the Handel Architects team to create a building that draws from the energy of Pacific Heights; seamlessly integrating the interior design aesthetic with the overall architecture."

West Coast sales and marketing company Polaris Pacific is leading sales for the array of one-, two- and three-bedroom flats and three-level townhomes in the building, along with a rare collection of seven penthouses ranging up to approximately 3,073 square feet and four Grand Penthouses with private, expansive wrap-around terraces ranging up to approximately 4,048 square feet. Pricing for the wide range of units will start from under $2 million and range up to $15 million - $20 million.

With stunning architecture envisioned and executed by internationally acclaimed Glenn Rescalvo at Handel Architects and interior design of all common spaces and residences by Handel Interior Design, Trumark Urban has partnered with the Bay Area's foremost luxury residential design team to create this masterpiece in Pacific Heights. Handel's execution of both the interior and exterior designs at The Pacific provide a nod to the timeless elegance of the residences found primarily in neighborhoods of London and Paris. The Pacific is also collaborating with Jay Jeffers to outfit three model residences in his own unique style, featuring design vision that may inspire owners for future design work in their own homes.

The Pacific will offer a full range of amenities that are essential to the lifestyle associated with the iconic area's discerning dwellers, including private vehicle valet, full service concierge, lobby attendant, a private Observatory Lounge overlooking the Bay and Golden Gate Bridge, a private guest suite and a world class fitness center. Intimate art installations from international contemporaries such as Helen Amy Murray and local creators including Silvia Poloto will be displayed throughout the common areas.

"The Pacific is truly unprecedented in its style, design and collection amenities, and we are excited to officially unveil the highly anticipated tower residences this month," said Mark Higgins, Senior Vice President of Sales and Marketing at Trumark Urban. "The Pacific is primed to make a significant impact and set the new standard for luxury living in this market."

Nestled one block from Fillmore Street, The Pacific's location is second to none, channeling an urbane oasis near parks and quiet streets with the metropolitan conveniences of high-end retail and Michelin-star restaurants.