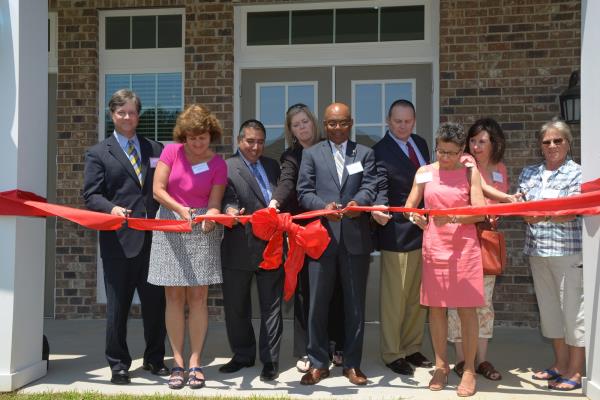 HATTIESBURG, MS - Nearly 68 years to the day after the Beverly Drive-in Theater opened in Hattiesburg, Mississippi, the 12-acre site is showing new life: This time, it's the Village at the Beverly apartments. The 52-unit complex officially opened today with a ribbon-cutting ceremony attended by Hattiesburg Mayor Johnny DuPree, local dignitaries, and project representatives.

"These affordable apartments have been the collective dream of many people in our community," said Mayor DuPree. "Today, we celebrate the hard work and determination of everyone involved as 52 families in need will have a beautiful, inviting place to call home. Thank you, FHLB Dallas, Hope Credit Union, and so many others for making this undertaking possible."

Village at the Beverly, which includes one- to three-bedroom units, was developed and built by the nonprofit Gulf Coast Housing Partnership (GCHP) in cooperation with South Mississippi Housing and Development and the Mississippi Home Corporation. Residents began moving in earlier this year; occupancy is currently at more than 85 percent of capacity.

"HOPE believed in and supported this project from the start," said Phil Eide, senior vice president of Community and Economic Development for HOPE, which is comprised of Hope Credit Union and Hope Enterprise Corporation. "It's great to see that families are the focus here. The project demonstrates what is possible when we all work together."

Community surveys during the project's design phase revealed that the complex, located at Edwards Street and Old Airport Road in Hattiesburg, would be most utilized by families.

The two-screen Beverly Drive-in closed in September 1987 and reopened in 2001 under new ownership, according to CinemaTreasures.org, a website catalog of U.S. drive-in movie theaters. Hurricane Katrina in 2005 irreparably damaged the property, forcing its closure. In 2010, the drive-in was destroyed by fire.

"This is an historic site," said GCHP President and CEO Kathy Laborde. "The Beverly opened May 29, 1948, as the second drive-in in Mississippi. It is a place that had given joy to families for decades. We are happy to be able to honor the site with the Beverly name and know that it will be a part of housing families in Hattiesburg into the future."

FHLB Dallas annually returns 10 percent of its profits in the form of AHP grants to the communities served by its member institutions such as Hope Credit Union. AHP grants fund a variety of projects, including home rehabilitation and modifications for low-income, elderly, and special-needs residents; down payment and closing cost assistance for qualified first-time homebuyers; and the construction of low-income, multifamily rental communities and single-family homes.

In 2015, FHLB Dallas awarded $7.4 million in AHP grants to 32 projects that will result in 965 new or renovated housing units. Mississippi received $1.5 million for the construction or renovation of 188 units. In 2016, FHLB Dallas is offering $7.6 million in AHP funding. Recipients will be announced later this year.

"Affordable housing continues to be in high demand across our five-state footprint," said Greg Hettrick, first vice president and director of Community Investment at FHLB Dallas. "Events like today's ribbon-cutting are terrific accomplishments for the communities served by our members."