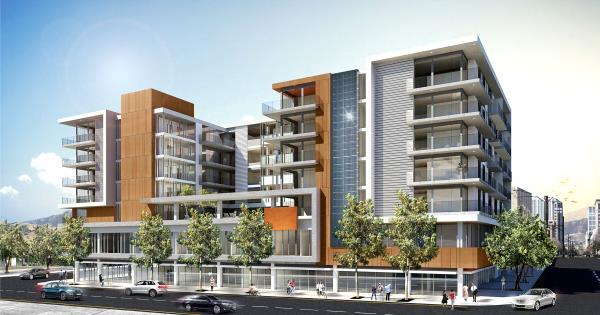 SAN DIEGO, CA - The Richman Group of California Development Company has started construction on a seven-story luxury apartment building with 5,841 square feet of ground floor retail space on a 0.57-acre site in Downtown’s East Village. The mixed-use project called F11 will front on the north side of F Street between 11th Avenue and Park Boulevard in the tech/design innovation hub called the I.D.E.A. District.

F11 will feature 99 apartments (11 one bedrooms, 51 two bedrooms and 37 studios), parking for 103 vehicles in a multi-level partially subterranean parking garage and extensive recreational amenities. The project is scheduled to open in early 2018.

Architects DesignARC designed a modified H-shaped building that showcases a large indoor/outdoor activity center on the third floor with a luxurious pool/spa area, entertainment center and outdoor kitchen. Other amenities include a fitness center and indoor bocce ball court.

The Richman Group of California, which is partnering with the long-time property owner Shearn H. Platt, is a subsidiary of The Richman Group Development Corp., ranked in the top seven of multi-family apartment owners in the United States. Financing for the $45 million project was provided in part by PNC Real Estate and The Richman Group (TRG).

“Since I grew up here and have spent much of my career in San Diego, I’m delighted to start construction on The Richman Group’s first San Diego project,” said Luke Daniels, the president of The Richman Group of California Development Company, who helped establish the company in January 2014. Daniels was a key member of the development team for several iconic San Diego projects, including Park Laurel overlooking Balboa Park and Mission Hills’ 1Mission, which earned the Gold Nugget Grand Award for best mixed-use project in the Western United States.

The Richman Group of California has developed an impressive portfolio in a short time. This month, the company completed construction of its first project, Ventana, a mixed-use project in downtown Fullerton with 95 affordable apartments for seniors and 3,244 square feet of ground floor retail space, and finished the foundation for Sage, a five-story apartment community in Cerritos with 132 market-rate apartments and deluxe recreational amenities.

Later this year, The Richman Group of California will break ground on a 23-story, high-rise apartment tower across the street from the Central Library in Downtown San Diego, at 330 13th Street. The project, designed by DesignARC, and Rob Wellington Quigley, FAIA, of San Diego and landscape architect Spurlock Poirier of San Diego, is planned for 222 apartments and more than 7,000 square feet of commercial space, as well as an adjoining low-rise building, which will include two penthouses, a restaurant with extensive outdoor seating and a park-like open space corridor.