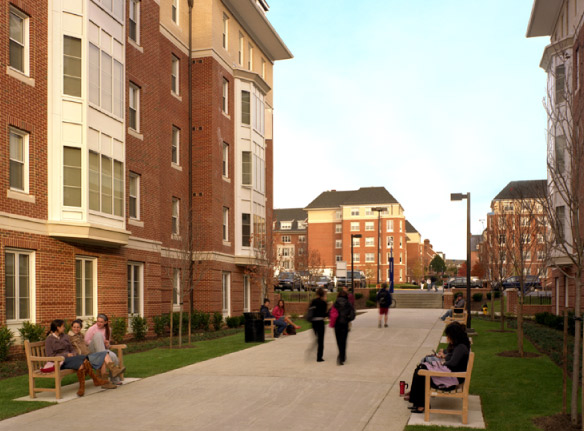 COLLEGE PARK, MD - A vibrant new development is in the works that will dramatically change the southern edge of downtown College Park. The University of Maryland announced plans to redevelop the Quality Inn, and several adjacent businesses, into a grocery-anchored, mixed-use community featuring upscale residences, restaurants and retail.

The project involves collaboration between Bozzuto, Willard Retail, and the University of Maryland College Park Foundation, the entity that will acquire the property in early 2017. This $110 million project is a signature piece of the University's Greater College Park initiative, an ongoing effort to rapidly revitalize the Baltimore Avenue corridor and academic campus.

"We are thrilled to contribute toward this transformative project at the southern gateway to our campus," said Peter Weiler, Vice President, University Relations and President of the UMCP Foundation. "The strength and retail expertise of our partners, Bozzuto and Willard Retail, will deliver this transformative market-leading community to the City of College Park."

The project, slated to break ground in 2018, willcreate a town-center atmosphere within steps of the campus, complete with 300 luxury apartments.  Modelled after a similar project that helped invigorate the area around Catholic University in Northeast D.C., this project is designed to create a welcoming atmosphere as visitors arrive on campus via Baltimore Avenue. It will also serve and enhance the amenities available to the community of more than 50,000 students, faculty and staff at UMD.

"We are grateful to have been selected to develop this wonderful project with the University of Maryland College Park Foundation, the University of Maryland, the City of College Park, Prince George's County, and Willard Retail," said Toby Bozzuto, President and CEO, Bozzuto. "The combination of our previous experience developing Monroe Street Market with Catholic University and the strength of our partners will create a community to complement the University's ongoing redevelopment efforts in downtown College Park. This is a rare opportunity to develop a project with transformative potential and we are proud of our stake in this extraordinary collaboration."

County and city leaders echo the enthusiasm. "I am thrilled to see Bozzuto, one of Prince George's County's most important companies, partner with one of our most important economic resources, the University of Maryland," said Prince George's County Executive Rushern L. Baker, III. "Over the past five years since the arrival of President Wallace Loh, we have seen a transformational change in housing, retail, employment, and transportation options along Baltimore Avenue and in the College Park area. With Bozzuto's involvement, I have confidence that this premier development will bring quality and vitality to the southern portion of College Park, making that area more attractive to new residents, as well as to students, faculty, and staff associated with the University."

"Remaking Baltimore Avenue as College Park's walkable main street is a key element of the University District Vision 2020," said Senator Jim Rosapepe, chair of the College Park City/University Partnership, which drafted the vision that was endorsed by UMD and the city. "This project, focused on residences and a grocery store designed with families and the community in mind, is a big step forward."

"With The Hotel at the main gate, and this new project at the southern edge of the city, College Park is now bookended by transformative developments supported by the UMCP Foundation," said Weiler.  "We are proud to play such an important role in creating a Greater College Park."