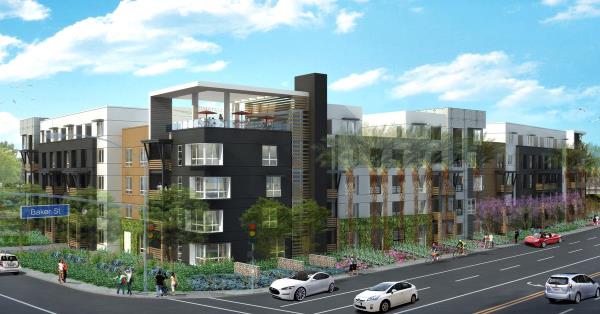 The ceremony for Baker Block featured speeches by Stephen Mensinger, Mayor of Costa Mesa; Sean Burton, CEO of CityView; Henry Cisneros, Founder and Chairman of CityView and the former Secretary of the U.S. Department of Housing and Urban Development (HUD); and Joe Flanagan, Principal and Co-founder of Red Oak Investments.

Baker Block is located at 125 East Baker St., at the corner of Pullman Street. CityView is creating the project along with its development partner, Red Oak Investments. The project sits on a 4.17-acre site previously occupied by an office building. The project is the first of significant scale to be re-zoned for residential use in the area adjacent to the South Bristol Entertainment & Cultural Arts (SoBECA) District, which is commonly known for its low-density office buildings and light manufacturing facilities.

“Costa Mesa and Orange County in general are experiencing strong job growth and constraints in housing supply, which are pushing rental prices to all-time highs,” Mensinger said. “Re-entitling land, such as the site for Baker Block, not only helps our city keep up with housing demand, but boosts our local economy by bringing in new residents who will dine and shop in Costa Mesa.”

Burton said his company is glad to be in Costa Mesa.

“Orange County is an important market for CityView as it is now entering the redevelopment phase, where obsolete structures are being converted into housing,” said Burton. “These urban infill projects are typically complex, so they are often overlooked by other investors. We are able to overcome these challenges by working with local partners who know the local market better than anyone else. The Red Oak Investments team has been instrumental in bringing Baker Block to fruition, and I thank them for all of their hard work.”

When completed in mid-2017, Baker Block is expected to feature 240 residential apartments and a six-story above ground parking structure. Planned amenities include a rooftop deck, a fitness center with yoga room, a conference room, a Wi-Fi lounge, a dog park, a dog wash station, a club room with a kitchen, a bike storage and maintenance area, and multiple outdoor spaces with a resort-style pool, BBQ grills and fire pits.

“Housing affordability is a major concern in Southern California due to the lack of supply,” said Cisneros. “Market-rate developments such as Baker Block help stabilize the market by creating additional supply. I’m extremely proud of the Costa Mesa City Council – as well as the CityView and Red Oak teams – for their vision and execution of this project.”

“I would like to thank CityView, the entire City Council, and the city’s planning department for recognizing the need for housing and working with us to re-entitle this land for an essential housing development with top-of-the-line amenities,” said Flanagan. “We look forward to completing this project with the CityView team and together welcoming our first residents.”

Construction for Baker Block is being led by Johnstone Moyer, Inc., one of the top-10 multifamily builders in California. The building was designed by Architects Orange of Orange, Calif.