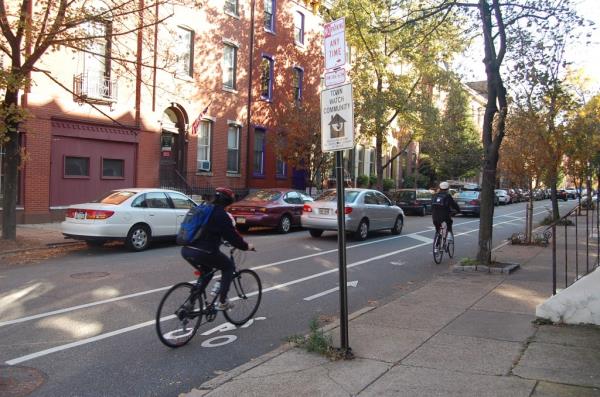 WASHINGTON, DC - Cyclists, take note: real estate developers and cities are becoming more responsive to your needs by creating an increasing number of communities tailored to those who would rather bike than drive. A new Urban Land Institute (ULI) publication, Active Transportation and Real Estate: The Next Frontier identifies this trend as "trail-oriented development," the latest phase in the evolution of urban development from car-centric to people-friendly design.

Similar to transit-oriented development, trail-oriented development takes advantage of and leverages infrastructure that supports active ways of getting around in urban areas. "Communities big and large are now investing in bicycle and pedestrian infrastructure. Their efforts are reshaping destinations across the globe, and have the potential to benefit people of all income brackets, as biking provides mobility for those needing or wanting a less expensive alternative to automobile ownership, maintenance and use," the report states.

The report, written by ULI Senior Vice President Rachel MacCleery and ULI Senior Resident Fellow Edward McMahon, examines the impact of the growing interest in active transportation on economic development, public health, air quality, community design and real estate design and investment. "At its core, the bicycle boom is about people choosing a lifestyle that gives them more options and requires less dependence on motor vehicles," it says. "Through supporting bike infrastructure, real estate professionals can play a significant role in creating healthier, more sustainable communities. They can also help position their projects and communities in a marketplace that increasingly values active transportation."

Amenities in the projects include bike storage; extra-wide hallways and bike elevators; a bike repair room; bike cleaning stations; a bike valet; shower and/or locker room facilities; bike parts or a mechanic on site; on-site bike rentals or a bike-share system; a bike park-and-ride system, and direct access to trails.

The projects show that "leading development practitioners are recognizing the competitive advantage of investing in active transportation amenities," the report states. "By leveraging and enhancing access to walking and bicycling facilities, they are helping to initiate a win-win cycle of mutually reinforcing private and public sector investment in active transportation in communities around the world."

Shared themes among the projects include:

Active transportation infrastructure can catalyze real estate development -- Trails, bike lanes and bike sharing systems can improve pedestrian and cyclist access to centers of employment, recreational destinations and public transit, as a result boosting the appeal of development near the infrastructure.

Investments in trails, bike lanes and bicycle-sharing systems have high levels of return on investment -- Regions and cities have found that relatively small investments in active transportation can yield high economic returns, due to improved health and environmental outcomes.

There is evidence of a correlation between access to active transportation facilities and increased property values – In urban and suburban markets, studies have shown that direct access to trails, bike-sharing systems and bike lanes can have a positive impact on property values.

The report points to evidence indicating that proximity to bike trails raises property values. For instance, the value of properties within a block of the Indianapolis Cultural Trail have soared nearly 150 percent since the trail's opening in 2008; and the value of properties near the Katy Trail in Dallas have increased 80 percent. Homes close to Atlanta's BeltLine have started selling within 24 hours; before the trail project began, homes in the same area stayed on the market for two to three months. And in Minneapolis, every quarter-mile of proximity to an off-street bike facility raises the value of a home by an additional $510.

The study also cites examples of the positive impact of bicycle access on commercial and economic development. In New York City's Time Square, building rents rose more than 70 percent following the addition of bike lanes in 2010; in both Salt Lake City and San Francisco, the replacement of some street parking with protected bike lanes along specific corridors resulted in higher retail sales in those areas. Meanwhile, in Sydney, Australia, the government concluded that building 124 miles of bikeways would generate more than $350 million (US dollars) in economic benefits.

In terms of health and wellness benefits, the report points to savings of $103 million (US dollars) in Sydney due to the increase in bike trips and reduced traffic congestion. Also, in Philadelphia, a 2011 study found that residents' use of biking trail system avoids $199 million per year in direct medical costs and $596 million in indirect costs.

The increase in trail-oriented development "is indicative of a worldwide trend of civic and private sector investment in active transportation facilities, and the growing demand for walkable and bikeable places," the report says.