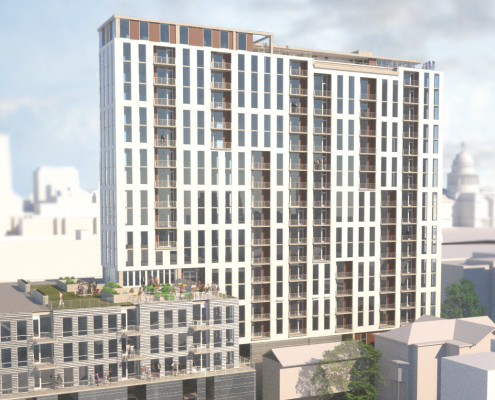 AUSTIN, TX - Aspen Heights, an Austin-based developer garnering quite a bit of attention for its largest project, The Independent, is also moving forward another endeavor on its home turf. It just topped out on a tower at 805 Nueces Street, which has been named Rise – 8th and Nueces. It is the first project to navigate the City of Austin’s Downtown Density Bonus Program. Aspen Heights will start marketing for future residents in May and construction is anticipated to wrap up by year’s end.

Rise – 8th & Nueces will feature 198 apartment units as well as live-work spaces on the ground floor. Other project features include a rooftop infinity edge pool, deck, and lounge, a rooftop dog park, and a top-floor fitness center overlooking the State Capitol Building.

The 22-story project is eight stories and 86,000 square feet larger than what it otherwise would have been, based on underlying zoning. That’s because the developer agreed to pay $868,400, or $10 for each additional square foot, to the City of Austin’s Affordable Housing Trust Fund, along with other costly building upgrades that make the project compliant with a two-star rating from Austin Energy.  It was granted the entitlements it needed to add those extra eight stories in December 2014, and will make the payment to the Affordable Housing Trust Fund this fall in advance of receiving its certificate of occupancy.

“It’s a large payment, no doubt. We concluded, however, that the increased density would make it worth it,” said Greg Henry, CEO of Aspen Heights. “Far from being just a benefit to developers, we believe this is an important tool needed to supply Austin with the kind of density it needs to increase the city’s housing options, as well as giving the City funding to provide affordable housing.”

“This being the first project to go through the Downtown Density Bonus Program, there was a certain amount of ‘feeling our way’ on both the City’s and developer’s part,” said Jim Robertson, Manager of the Urban Design Division in the City’s Planning and Zoning Department.  “But we worked together effectively, and we believe the changes that Aspen Heights made to the project, including sidewalk amenities and ground-level design enhancements, ended up making for a better project.”

Aspen Heights worked with local firm Greenstar Development to source the land, fund the project and assist with the development of Rise – 8th & Nueces. The project’s architect, Rhode:Partners, worked closely with city staff to also ensure the project meets guidelines established by the Urban Design Commission. That’s the same architect behind Aspen Heights’ most high-profile project to date, The Independent, a cutting edge, cantilever-designed condo project that broke ground earlier this year and will soon become the tallest structure in downtown Austin.

Henry notes Rise – 8th & Nueces was initially proposed by others as a 12-story, 72-unit condominium complex, meaning the location will supply an additional 124 units in a part of downtown desperately in need of the supply.

“While Aspen Heights has been based in Austin since 2008, it wasn’t until 2013 that we actually started developing projects here,” Henry said. “It’s really nice for us to see these projects come to life.  Each one stands on its own as a physical manifestation of the way we seek to think creatively in our industry and add value to our home town.”