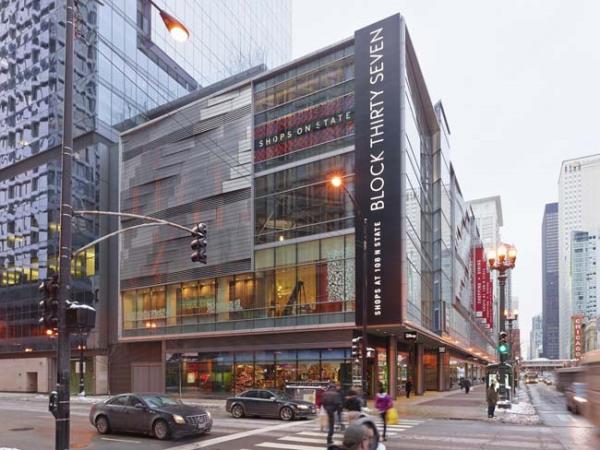 CHICAGO, IL - CIM Group announced that its residential tower at Block Thirty Seven has been branded as the Marquee at Block 37 and is unveiling its initial leasing plans leading up to a summer opening. The 34-story, 690-unit apartment tower is set atop the northern end of the four-level Block Thirty Seven retail center.

To kick off the leasing program for the Marquee, a pop-up vignette will open in Macy’s flagship State Street store across the street from Block Thirty Seven. The display will provide an opportunity to see firsthand the modern style and quality finishes of the residences as well as the tower’s many on-site amenities. In March, a pre-leasing office will open on the third floor of the Block Thirty Seven retail center allowing interested residents to join the interest list or pre-lease a unit.

The Marquee celebrated a major construction milestone in September 2015 with the topping out of the tower, which completes the mixed-use development plan for Block Thirty Seven and will be a significant component in the ongoing residential growth in Chicago’s Loop.

The Marquee at Block Thirty Seven is a sleek, glass-clad tower with recreation and relaxation areas designed to take advantage of the sweeping city views, including a rooftop spa and fitness center as well as a fifth floor amenity deck with an outdoor pool and spa, cabanas, fire pits, grilling stations, and an outdoor terrace overlooking State Street. Additional amenities include a game room, dog run and wash, business center and conference rooms, cinema lounge, event room and catering kitchen, and coffee bars. Residence interiors are designed as comfortable, modern living spaces with top-quality finishes and features.

The Marquee at Block 37 sits atop and has direct secured access to the Block Thirty Seven retail center and its array of shopping, dining and entertainment options, as well as access to the Pedway and Red and Blue “L” lines, providing a top-tier amenity just an elevator ride away for Marquee residents.

Block Thirty Seven is home to the popular Latinicity, a 22,000-square-foot sophisticated casual dining hall on the third floor featuring multiple authentic Latin cuisine options created by Richard Sandoval Restaurants that opened in October to rave reviews and large crowds. In December, AMC opened the highly anticipated, 11-screen AMC Dine-In Theatre on the fourth floor. Further enhancing the center’s premier dining options is The Dearborn – an Urban American Tavern, currently under construction on the ground floor at the corner of Randolph and Dearborn Streets, the latest restaurant from the Lawless family, creators of the popular The Gage restaurant in the Loop. In addition to these new entertainment and dining options, Block Thirty Seven is expanding existing stores such as Zara, which is under construction on a 30,000-square-foot flagship store at the high-profile State Street and Randolph Street intersection.