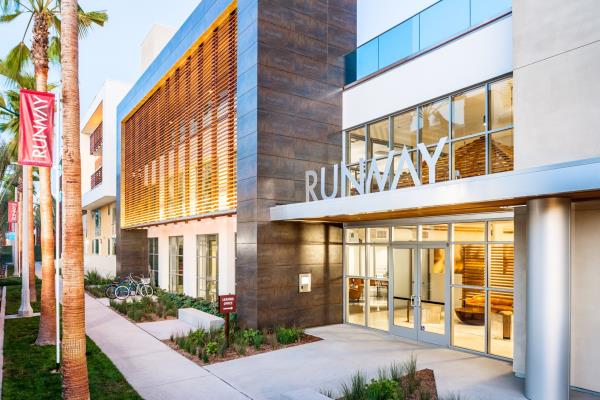 The legendary parcel of land that once was part of the runway for Howard Hughes’ aerospace empire is now a thriving, large-scale, mixed-use center offering unique shopping, dining, entertainment and living space in the heart of the Playa Vista community.

The long-anticipated lifestyle center serves as a vital connection between the Phase I residential community and the Campus at Playa Vista, now a key part of Silicon Beach, and home to an array of top-tier employers including Google, YouTube, Yahoo! and Facebook.

Runway includes 217,000 square feet of retail space, 420 apartments and 33,000 square feet of office space. The retail area is anchored by a nine-screen Cinemark Cinema, Whole Foods and CVS Pharmacy, and has a wide variety of restaurants, bank branches and lifestyle stores, including Fred Segal. Cedars-Sinai is enhancing its footprint in Southern California by leasing Runway’s entire office area for high quality medical offices. Hal’s Bar & Grill, which closed its Abbott Kinney location in 2015, is scheduled to open at Runway later this year.

Runway also offers a variety of residences that sit above the first-floor retail area and in two buildings adjacent to a park across the street. The 420 apartment homes, developed by Phoenix Property Company, range from studios to two-level, two-bedroom units encompassing more than 1,300 square feet. Amenities include two fitness centers, two pool/spa terraces and a gaming area with media lounge and multi-screen video gaming.

“This sale caps nearly a decade since Lincoln began its work at Playa Vista, and it’s incredible to see the vision come to life in such a significant way,” said David Binswanger, Senior Executive Vice President of Lincoln Property Company. “Playa Vista had been an idea for decades, and the completion of Runway demonstrates that the Playa Vista community concept was smart, visionary and achievable. Lincoln is proud to have played a meaningful role alongside so many other talented companies, real estate professionals, architects, urban planners, community leaders, pioneering residents and government officials that helped bring the Playa Vista concept to life.”

In 2014, Lincoln and ASB Capital sold their remaining undeveloped land in the Campus at Playa Vista to Google for the development of almost 900,000 rentable square feet of office and supporting space. In September of 2012, Lincoln and partners Alcion Ventures and Phoenix Property Company purchased 14 acres of undeveloped land in Playa Vista’s final phase, known as the Village at Playa Vista, on which Runway now sits. Paragon Commercial Group played an instrumental role creating the dynamic mix of retail tenants. Construction of Runway began in April of 2013, and was completed in stages during 2015.

The Runway retail complex features wide sidewalks for outdoor dining, soothing water features, communal seating areas, firepits and a direct connection to Playa Vista’s Linear Park, which links the different phases of the community. A significant public art program, curated by the Do Art Foundation, features a diverse group of local and international artists whose works are positioned on multi-story murals and sculptures throughout Runway, reflecting the urban innovation, vibrancy and creativity that make the community unique.

“The team at Phoenix Property has been honored to play a central role in advancing Runway,” said Rusty Ross, Vice President of Development at Phoenix Property Company. “While it’s bittersweet to sell the property after so many years of working on it, it’s a privilege to have been involved in creating such a dynamic development that serves as the heart of the Playa Vista community.”

“The unique blend of luxury living spaces, destination retail and chef-driven restaurants located in the ‘town center’ of this California-coastal community drew Invesco to the property. They embraced the development team’s vision for a best-in-class, mixed-use community, and will be terrific stewards going forward,” said Doug Bond, Senior Managing Director of HFF, whose firm also raised the equity and construction financing for this development.